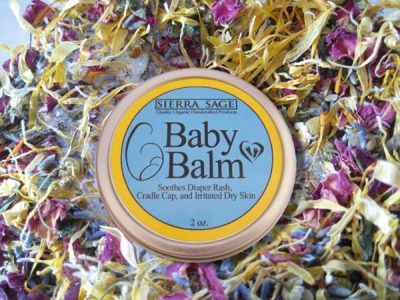 Felix never had cradle cap, but I did as a baby, and my mom employed a bunch of different natural remedies to try to get rid of it. As we all know, natural treatments aren’t always as effective as the harsh, synthetic ones (I still cannot find a natural dish soap that really works as well as Dawn–can you?). So, I was stuck with a gross crusty head until I eventually outgrew it on my own.

And now, thirty-two years later, I seem to have stumbled upon the secret cure to cradle cap.

As many of you know, we recently launched an online store, and one of the products we carry is a Baby Balm by an Idaho-based herbalist named Jen (her line is called Sierra Sage, and it’s one of the oldest herb companies in the U.S.). When I discovered Sierra Sage, I loved the way the Baby Balm smelled and felt (and it’s totally organic and has nothing sneaky in it), but Felix is out of diapers now so I couldn’t try it on a rash, and as I mentioned, cradle cap wasn’t a problem for him.

Our very first customer happened to buy some of the balm, and within two days of shipping her order, we received the following message on our Facebook page:

“I wanted to comment on the baby balm I purchased, but I didn’t see where I could do it on the site. I bought the baby balm after I had tried everything else in an attempt to get rid of my little girl’s cradle cap. It is amazing. After the 1st use 75% of it fell off. And after the 2nd application no more cradle cap, not to mention no more irritated baby:). Thank you!!!”

By the way, whenever I read testimonials like this when considering a product, it goes in one ear and out the other because it sounds phony and suspect, but this really is exactly what this woman wrote (and no, I didn’t pay her to write it). I hope more of you will try this balm for cradle cap or diaper rash and have the same results. I happen to love the Sierra Sage products made for grown-ups (the Green Goo is awesome for bruises), so I’m happy to give Jen more business!