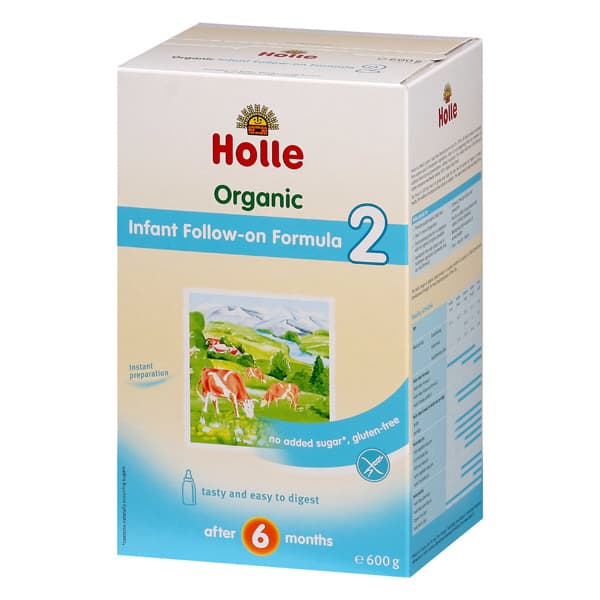 Below is an email I recently sent to a private client of mine. Since the number one question I receive is “What is the safest infant formula?,” I thought some of you might be interested in my analysis of the two safest brands of baby formula, HiPP vs. Holle (both from Europe). Note that whichever formula you choose, you should always use a water filter to remove chlorine (carcinogenic) and fluoride (linked with lowered IQ). (Here’s more on why you should get a filter and which ones I like.)

So the bottom line is I would recommend Holle formula as the best option, but it’s not without some problems, unfortunately (yet again it becomes clear that nothing can compare with breastmilk). HiPP is superior in a few ways, but I’ll explain why ultimately I would go with Holle below.

Here’s what I considered when researching HiPP vs. Holle:

Bottom line: Both HiPP and Holle are superior to American formulas, in my opinion. They lack many of the concerning ingredients found in most formula you get here, don’t have white sugar or corn syrup in them, and also skip some preservatives and the carrageenan found even in other organic formulas. If it were my baby, I would probably choose Holle because of the aluminum issues with HiPP–which to me is more concerning than the maltodextrin (the only major downside to Holle). The lecithin, biodynamic farming, and LCP oil issues further put Holle in the lead. And if you choose Stage 1 Lebenswert, you skip the maltodextrin as well.

In terms of where to by Holle (or HiPP): this is complicated since these formulas do not meet FDA approval. There are many online vendors (including Ebay sellers), but until I can vet that one (or several) are legit, I cannot make a recommendation on where you should purchase European formula. I hope to have this information available soon.

October 2019 update: I’ve vetted several places to purchase this formula, and am happy to have established affiliate relationships with the following sellers:

P.S. If you want to learn about goat milk formula (including one from Holle), click here.

Standard disclaimer: The advice and opinions presented here by Gimme the Good Stuff are based on our own research process as well as current scientific evidence. For medical advice, you should see a licensed medical professional. Statements have not been evaluated by the FDA and are not intended to diagnose, treat, or cure any illness.    Manufacturers change the ingredients in their products frequently; always read labels or call companies to verify.

You know it’s an exciting Saturday night when the pint to human ratio is 1:1. @benandjerrys @haagendazs_us ...