Home » Posts » In Search of Organic French Fries (and a Recipe!)

In Search of Organic French Fries (and a Recipe!)

French fries are Felix’s favorite food. I consider our diet to be pretty good, but it’s alarming how often my son has a mound of salty, greasy potatoes in front of him. Even my favorite vegan restaurant, Candle Cafe, offers French fries, and whenever we dine out with friends, someone inevitably orders a big pile. 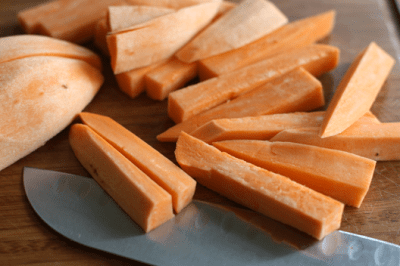 I Thought I Found the Perfect Place…

Because of Felix’s borderline addiction, I was thrilled when I noticed a new restaurant in our neighborhood called Bareburger, which advertised organic grass-fed burgers, organic salads, and organic milkshakes.

I was nearly giddy when I saw a list of all organic vegetables Bareburger uses. The milk in their shakes is not only organic, but comes from grass-fed cows. They serve organic beer and organic ice cream. The tables are adorned with bottles of Muir Glen ketchup and OrganicVille mustard. Baregurber quickly became our go-to place when we want to indulge in junk food (a bacon burger for Daylon, a black and white milkshake and grilled cheese for me, and a pile of French fries for Felix).

After eating at the perpetually-packed Bareburger a few times, I noticed that nowhere on their menu did they mention the sourcing of their potatoes. When I inquired, I learned that their fries are made from “just regular Idaho potatoes.” Gasp! (I haven’t yet heard back from Bareburger addressing this lapse.)

While potatoes aren’t on the “dirty dozen” list of the 12 most heavily sprayed foods, it’s only because they come in at number 15. Most conventional potatoes contain detectable leveles of chlorpropham, an herbicide that inhibits sprout growth (no wonder my organic spuds always grow eyes so quickly!). The EPA is currently studying the ecological and human health risks of chlorpropham, and in the meanwhile I would like to keep Felix’s exposure to a minimum.

Why Restaurants Don’t Use Organic Potatoes

I’m sure that cost is part of the problem. Conventional russet potatoes are 99¢ a pound at my grocery store; organic are $1.49 a pound. However, Bareburger splurges on organic red peppers ($3.99 vs. $6.99 a pound for me) and organic and grass-fed ground beef ($2.99 vs. $7.99 a pound), so there is obviously more to it. An organic pepper probably won’t spoil any more quickly than a pesticide-laden one, but because chlorpropham keeps potatoes sprout-free, there is an obvious benefit to using conventional. Still, Bareburger should certainly be transparant about this departure from its ostensible commitment to clean food.

For now, I’m trying to make more fries at home, and usually I use sweet potatoes for an added nutritional boost

By the way, I’m sure many of my readers are horrified at what I’m paying for groceries. Welcome to New York City, people.

4 responses to “In Search of Organic French Fries (and a Recipe!)”