Meet Three Mompreneurs and Their Motivations

I get a lot of questions about my business—how Gimme the Good Stuff got started, why I do what I do, and if I have any tips for other moms (and dads) who are interested in starting their own web-based businesses.

On the one hand, starting a business when you have kids is a terrible idea. You’ve probably never had less time or energy. (Most days, I feel like I’m just barely getting by!)

On the other hand, having kids can be deeply transformative and motivating. You look at the world differently. You worry more about the present and the future. You do some growing up yourself, maybe discovering new strengths and skills. And, ugh, family life is expensive, so I for one was extra motivated to earn more income.

Gimme the Good Stuff is about 7 years old now (the same age as my oldest son—not a coincidence!). So it’s probably about time that I write about my experiences as a “mompreneur.” And because it would be lame for me to just talk about myself, and because I know some other mission-driven mompreneurs, I decided to interview two of them and write a three-part series about mompreneur life:

I hope you find this series to be interesting and helpful. Please comment to share your questions and stories. And yes, all you pop-preneurs out there are welcome to join us, too! 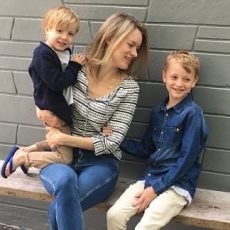 As you probably already know, I have two sons—they’re 7 ½ and 3 ½ years old—and I founded this website, Gimme the Good Stuff.

How and why I became a mompreneur: Gimme the Good Stuff was born around the time I had my first son, in 2009.

I grew up in Vermont in a pretty health-obsessed community and family, but it’s when I was pregnant in my late 20’s that my curiosity and concern went into over-drive. I wanted to know what types of ingredients were in everything I was putting in and on my pregnant body (and eventually in and on my baby, and using in my home). So I started researching and had a lot of wake-up calls (read: freak-outs) about the toxins found in a lot of conventional products and even “natural” products.

Soon, friends began asking me what products they should be using to give their kids the healthiest start possible. First I compiled Word docs with lists of “The Good Stuff” and “The Sneaky Stuff,” and eventually I turned these lists into a product review blog.

Starting a blog was easy, but for a long time (like almost 4 years), GGS was not a money-making business–I didn’t even have a revenue plan for the first year. You could say that I began this work very much on purpose, but the business part was something that came later.

Also, confession: Although I was totally into being a stay-at-home mom in theory, the reality of it wasn’t quite what I had envisioned. I was restless and more than a little bored. I missed some of the stimulation from my old full-time job as a communications director, a job I left when my son was born. Researching and blogging (between nursing and diaper changing) was a nice intellectual and professional outlet for me, even without a paycheck! 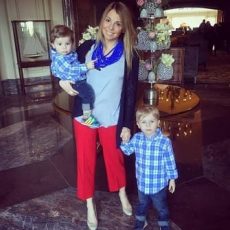 Katya is the mom of two boys, ages and 5 and 2 ½, and she also has a thriving business as a Beautycounter consultant (she earns more than double her former corporate salary!).

I wanted to include Katya in this series for a few reasons. Like me, she had a wake-up call related to the ingredients in cosmetics and personal care products. However, she funneled her passion into a different type of business (more on this in a minute). Also, I really like Beautycounter’s products and mission—more so than any other single cosmetic brand I’ve found. (Here’s the specific makeup products I use.)

How and why Katya became a mompreneur: Katya worked in high-tech corporate marketing and communications for 14 years. She had always wanted to own her own business, but she didn’t have the funding, patience, and risk-tolerance to open a traditional brick-and-mortar store.

Then she suffered a bout of postpartum psoriasis that affected her forehead and scalp. The psoriasis and the fact that she was nursing made her want to use products that only had safe ingredients.

For seven months, Katya experimented with a ton of “safe” and “natural” options, but nothing worked. Desperate, Katya turned to a conventional skincare brand. Her psoriasis started to clear, but as soon as she missed a step in the complicated regimen, it would flare up again.

Beautycounter was really new at that time. Katya was skeptical after having so many “safe” brands fail her, but she quietly did some research on Beautycounter after a friend recommended it. She was impressed by the background and safer-beauty vision of Gregg Renfrew, Beautycounter’s CEO and founder. So she gave some Beautycounter products a try, and after three days, her psoriasis was not just temporarily cleared up, but gone.

Relieved and inspired, Katya felt a huge responsibility to “pay it forward” and help educate people about the Bad Stuff in most personal care products, and the much safer alternatives available. So she became a Beautycounter consultant and grew her Beautycounter business for about two years while continuing to work her traditional job.

Katya started doing Beautycounter full-time after the birth of her second son, at which point it had more than replaced her corporate salary. These days, she loves working independently while supporting a company that’s on a mission to affect policy change in Washington.

(If you’re interested in starting your own Beautycounter business, contact Katya. She’s not pushy, I promise, but because she’s a managing director and a founding member of Beautycounter, she really is a wealth of knowledge). 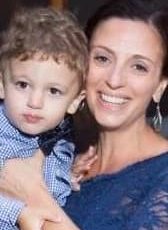 Elleni and I go way back—more years than I care to count!—and these days, she’s the mom of three young kids (her boys are 5 and 3 ½ years old, and her daughter is 15 months), the founder and owner of Olea True, and a branding and marketing consultant for some businesses (including for Gimme the Good Stuff!).

How and why Elleni became a mompreneur: Elleni has always been business oriented. She owned a brick-and-mortar maternity and baby boutique in the DC area before selling it so she and her husband could move back to Massachusetts, where she’s from, to raise their family. She was a full-time stay-at-home mom until recently, when two big things motivated her to return to her entrepreneurial roots.

The first thing was practicality (Elleni is nothing if not practical!). Elleni has an MBA, but she knew she couldn’t rely on that alone to score a job when she was ready to go back to work after 10 years of full-time mothering (that’s how long it would have been between the birth of her oldest child and when her youngest started kindergarten).

At the same time, Elleni calculated that she would have to earn approximately a gazillion dollars a year to offset the cost of full-time childcare for three young kids in her pricey Boston suburb. She and her husband decided that it made sense for her to do something part-time and independent. Elleni also wanted to know that she could be the breadwinner for her family, should the need ever arise.

The second thing that motivated Elleni to get back to work was passion. While her consulting work provides an outlet for her professional interests, her other business, Olea True —a premium olive oil company–came to her as a passion project. Her uncle, a scientist, introduced her to the health benefits of high-phenol olive oil. She quickly became fascinated, reading everything she could and talking about it to anyone who would listen.

Elleni was also moved by the fact that many Greek olive farmers were selling precious, high-quality olive oil to huge conglomerates for way less than what it was worth. So Elleni and her uncle teamed up to buy one batch of olive oil from one farmer at a fair price and import it into the U.S. sell it to friends and family and anyone else they could reach. They also created a pilot program to test premium olive oil for its phenol content (phenols are one of the components behind olive oil’s health benefits), and Olea True was born.

Do these mompreneur stories ring true for you?

Do you identify with any of the motivations shared by me, Katya, or Elleni? I think it’s interesting how different we all are.

For instance, Elleni is logical, practical, and strategic in all business decisions, and I’m all over the place (I never even wrote a business plan!).

Katya followed a very traditional corporate path before veering off, whereas Elleni has always followed an entrepreneurial career path (she’s started a handful of successful businesses).

I left my job when I had my son without any plan for replacing the income; Katya waited until she HAD replaced her income before leaving her “real” job. (Wait–the pattern I see here is that Elleni and Katya both know what they are doing, and I’m flying by the seat of my pants! Sounds about right…)

The one ingredient you’ll find in all our stories is a true passion and mission behind what we are doing. I believe that this is the reason that here we all are–at last!–earning real incomes running our own businesses.

It really goes to show you that there isn’t a one size fits all model for this stuff, but that a sincere passion for the business you choose is crucial.

Do you have any of your own work-and-family stories to share? Do you have questions for any of the three of us? Please comment below and one of us will respond!

Next week, I’ll be back with Katya and Elleni to talk about the major pros and cons of mompreneur life (there are many of each, trust me!).

3 responses to “Meet Three Mompreneurs and Their Motivations”