My Two-Year-Old Doesn’t Sleep Through the Night

Felix is 25 months old and isn’t sleeping through the night. And guess what? He never has. In fact, he’s never slept more than four hours without waking up to nurse. Most people don’t know this, because I’ve been in the closet about it for a long time. Here’s how it went: 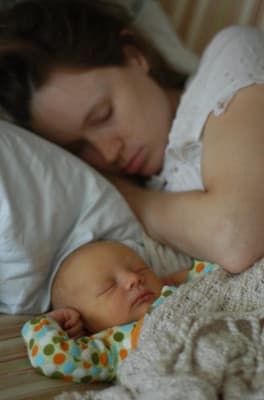 An Overdue Milestone?
In Felix’s baby book, the milestones list is roughly chronological, each line beginning with “When you first…” and a blank space to fill in the age when the benchmark is met.

The chart begins with “smiled” and ends with “said the alphabet.” Since Felix has been singing his ABC’s for months now, this page of his baby book is complete, but for one glaring omission. The “slept through the night” milestone is nestled right between “ate baby food” and “crawled,” two benchmarks Felix hit before he turned seven months old. Apparently the authors of the baby book know all the same families I do.

What’s Wrong with Him?!

Because I’m not friends with any families who co-sleep, skip the cry-it-out training, and continue to breastfeed their toddlers, I don’t know if my experience is unique. My hunch is that unless you sleep train and night-wean your baby, he’s not going to sleep through the night. Or maybe everyone else is lying too?

From the research I’ve done (including consulting my own and my brother’s baby books, as we were not sleep-trained children), it seems that extended nursers usually sleep all night after they are weaned, or between two and three years old, whichever of these happens last.

The Myth of Sleeping Through the Night

One obvious but often ignored fact is that no one sleeps through the night. We all wake between sleep cycles, if only to roll over or re-squash our pillow, and even if we don’t remember doing so come morning. My husband habitually mumbles gibberish in the wee hours before dawn, sometimes with his eyes open.

When Felix awakens, instead of bunching up his pillow and tucking the blankets under his chin, he wants to breastfeed, because this is how it’s always been. At the time of this writing, I don’t mind obliging him: I barely wake up, and fall back asleep the moment he’s latched on. His own sleep is virtually uninterrupted, and he wakes up cheerful and well-rested. But it’s not always so cozy a picture in the James family bed.

An excerpt from a recent email I sent to my my mother, who usually receives the brunt of my exhausted frustration:

Ugh! Felix nursed constantly last night, all night. It’s not the nursing that is so troublesome, but he plays with my other nipple and I can’t sleep through this (not well anyway). In these moments (hours), I find myself seething, thinking of Dr. Sears and his benign little know-it-all smile and wanting to claw his eyes out!

From Smug to Ugh

When it comes to our sleeping arrangements, my emotions run the gamut. Sometimes, I operate from a place of self-satisfied conviction that I’m doing what’s best for my kid—emotionally and physically—by sleeping near him, a practice shared by every primate besides humans. Other days, I’m exhausted and desperate, ready to renounce my beliefs, buy a crib and some earplugs, and let Felix scream, no matter how it may be harming him.

It’s my nature to never feel 100 percent certain of any decision I make. I agonized over which vaccines to get for Felix, and finally decided to give him all of his shots, on a delayed schedule. But, in my gut, does it still feel wrong each time he’s jabbed in the perfect, chubby thigh? Yup. And, in the months before he received his pertussis vaccine, did I fret when a cough sounded a little, well…whoopish? Totally.

Obviously, some parenting decisions are easier than others. When it comes to vaccines, at least either choice is about Felix’s wellbeing (or the wellbeing of the community at large). When it comes to allowing him to cry it out in order to learn to “self soothe,” I just can’t shake the truth: for our family, this decision would only be about making my own life easier, not because I think that “learning to fall asleep on his own” is something that will truly benefit Felix at age two.

Perhaps I should have said this paragraphs ago, but I realize that for moms working outside of the home, sleep training is likely the only realistic option. And I know dozens of amazing mothers with incredible, well-adjusted sleep-trained kids. 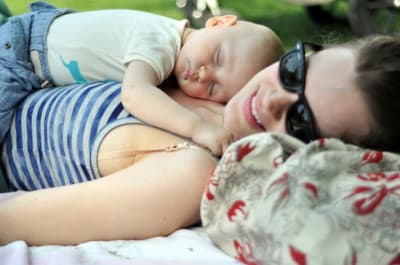 But Would it Be Better for Felix?

I have tossed around the notion of doing sleep training because perhaps Felix would benefit from having a more well-rested, and thus happier and more fun, mother. But then again, a lot of  things would make me a happier mom—like drinking three glasses of wine while Felix and I eat lunch, or putting him in front of a Bob the Builder DVD for an hour while I take a bath (and drink three glasses of wine there). Of course, it would also be better for him to eat homemade spelt muffins than organic cheese curls, but I resort to a ton of packaged snacks simply because they are so much easier. Parenting choices fall on a spectrum, and we all have to find our comfort zone.

At this point, I can’t make myself comfortable with the idea of closing the door on Felix and letting him cry, no matter how tired some mornings find me. So, for us, for now, that section of his Felix’s baby book will just have to remain blank. Talk to me again when he’s three.