Ah, the joys of chocolate. I indulge more frequently now that chocolate (the dark kind, of course) has risen to health-food status. When I first discovered healthy eating (more than 35 years ago), chocolate was a major no-no, and carob was the chosen food for baking desserts. While carob and chocolate have very distinct flavors, I find that the former satisfies a craving for the latter.

While thumbing through the Basic Balancer section of my Essential Eating cookbook, I immediately noticed a recipe for carob brownies and baked up a batch…and then another batch…and then another. They are delicious! It’s been years since I’ve cooked with carob, and I’d forgotten how yummy it is (really!)—and what a nice treat carob desserts are for kids, since unlike chocolate, carob is caffeine free.

Why Carob Is Better
The carob brownies from the Essential Eating cookbook are even included on the Super Cleanser diet–that’s how healthy they are! 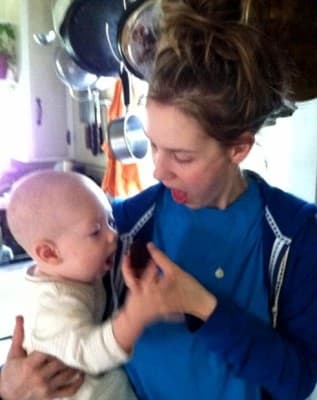 My grandson Theo wanted a bite of my carob brownies!

Quinoa Flour Carob Brownies
The brownie recipe in Essential Eating cookbook has the added advantage of being gluten-free because it is made with quinoa flour instead of wheat. I top the carob brownies with organic raw sour cream sweetened with a little maple sugar. Maia prefers to ice her brownies with a maple cream cheese frosting. Either version (or without any topping at all) is a delicious snack or dessert for kids and grownups alike.

I am happy to share this recipe—send me an email (sweavergoss@gmail.com) if you’d like me to pass it along you.