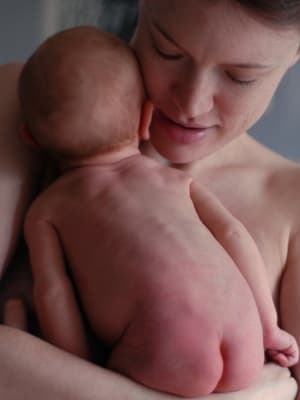 I didn’t intend to use non-toxic baby wipes at all, and assumed that in addition to exclusive cloth diaper usage, I’d be employing a washcloth and warm water at changing time.

Um, yeah. As soon as I experienced the convenience of the disposable wipe, wringing out poopy rags was a thing of the past.

Because of the frequency with which we use baby wipes, the fact that they are used on the most delicate area of a baby, and the fact that we don’t wash the area off after use, I think it is imperative that we choose truly non-toxic baby wipes.

In terms of the environment, no disposable wipe–including the “eco-friendly” ones I will recommend below–is a green choice. Only water and a washcloth can be considered truly eco-friendly. 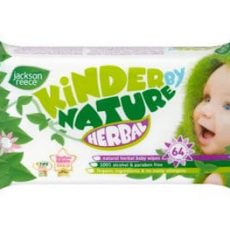 Like everyone who tries Jackson Reece wipes, I was instantly hooked. Not only are they nontoxic and earth-friendlier, but they have the perfect amount of moisture. Even with kids out of diapers, I still keep these around for wiping hands and faces on the go.

Ingredients to Avoid in Baby Wipes

If you are like me and have a hard time depriving yourself of the convenience of disposable baby wipes, your best bet is to avoid anything scented, since “fragrance” or “parfum” almost always means pthlalates (known endocrine disruptors). Additionally, many conventional wipes contain parabens, and some also contain phenoxyethanol, a suspected carcinogen. In particular, “natural” or “organics” wipes might contain phenoxyethanol as a preservative.

In addition to the ingredients you’ll see listed on the side of a package of wipes, there are a number of other chemicals that may be included—contaminants and byproducts of the production process for some of the ingredients that go into the wipes. For example:

Since Felix was born in 2009, a bunch of new brands of biodegradable wipes have popped up—and they are remarkably effective, superior in terms of earth-friendliness (ideally, they should be flushed or composted), and safer than other “natural” brands of wipes. Most aren’t reviewed by Skin Deep, but I’ve researched the ingredients and explain any concerns below.

A few companies produce natural liquid solutions (some with accompanying cloths), to use in place of baby wipes, but I don’t see why you wouldn’t just use water and a washcloth if you were going this route. Should you want to purchase one such eco-friendly solution, this is a safe option.

As for ready-made baby wipes, read on. 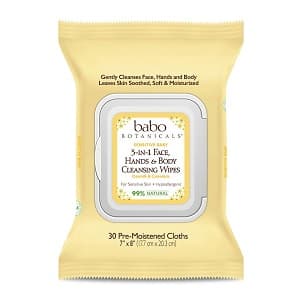 Babo Botanicals products are produced on a certified organic farm in upstate New York, and are made in small batches. Babo utilizes a Certified Organic Nutri-Soothe™ Blend, which is a  mix of chamomile, calendula, kudzu, and watercress, rich in vitamin A, C and D, and which was developed to deliver maximum nutrients, protection and moisturization.  None of Babo’s products contain sulfates, parabens, phthalates, synthetic fragrances, 1,4-dioxane, formaldehyde-releasers, or propylene glycol. 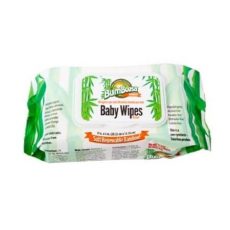 Bum Boosa Baby Wipes are made of bamboo (another renewable resource), and are biodegradable. They are also soft and smell nice (scented with only essential oils). They contain polysorbate 20, but this emulsifier scores only a 1 on Skin Deep. Citric acid is perhaps more concerning, but since it’s only present in trace amounts and evidence of its toxicity is lacking, I don’t think it’s a big concern. You can buy these wipes in bulk on the Bum Boosa website or Amazon, and they are the most expensive of the Good Stuff.

It seems that Elements Naturals has gone out of business. 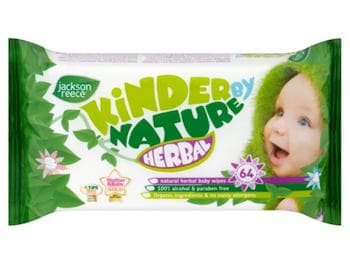 Jackson Reece Herbal and Biodegradable Wipes are made from wood pulp (a renewable resource), and have a nice short list of ingredients. These come in scented (essential oils) or unscented varieties, and while they are a slightly pricier option than more widely-available wipes, Jackson Reeces wipes are big and thick, so I find that I go through fewer of them than other brands. I converted to Jackson Reece wipes 3 years ago and now cannot tolerate any other brand of wipe–to me, they offer the perfect level of wetness (I found Earth’s Best to be too sudsy to the point that I wanted to wipe down my baby with a towel afterwards, and other brands to be too dry.) Jackson Reece wipes are made in the UK and hard to find here, so we are thrilled to now offer them in The Good Stuff Store! 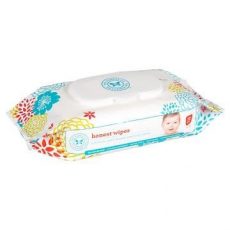 Some of Honest’s products are Good Stuff and some are not. Their wipes fall into the former category. The only potentially concerning ingredient they contain is silver dihydrogen citrate (which they use as a preservative), but Honest claims that the silver they are using does not contain problematic nanoparticles. Honest wipes are not cheap (at around 7 cents per wipe), but they perform well. You can get Honest on their website as well as on Amazon. 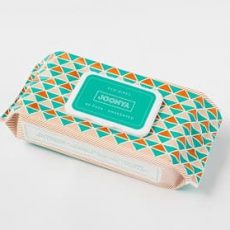 Joonya’s founder recently sent me some wipes to try, and even though I no longer have any kids in diapers, I loved the performance of these wipes for cleaning hands and faces (I also tried them a few times on my 3-year-old’s tush after trips to the toilet). Joonya definitely wins for nicest looking packaging, and I liked the amount of wetness and lack of suds in Joonya wipes. In terms of the ingredients in these wipes–nothing concerns me. They use decyl glucoside as a surfactant and silver dihygrogen citrate as a preservative (which carries an EWG score of just 1). 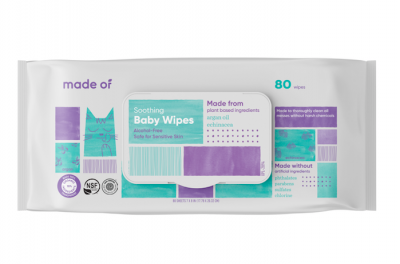 MADE OF Soothing Baby Wipes

Made Of Soothing Baby Wipes are free of alcohol and other skin irritants, Made Of’s wipes are also independently tested free of microbes, heavy metals, parabens, and more.

UPDATE as of March 2018: Thrive added benzyl alcohol, so I can no longer call these non-toxic baby wipes. 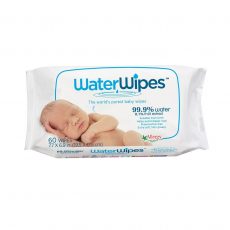 WaterWipes can rightfully be called “the world’s purest wipe,” since they contain nothing but water and grapefruit seed extract. For a while, rumors circulated that the grapefruit seed extract was contaminated with carcinogenic chloroform and possibly parabens as well, but the president of WaterWipes has since explained the extraction process–in addition, independent testing has shown WaterWipes to be free of a variety of contaminants, including triclosan and parabens. While this is good news, the lack of chemical preservatives means WaterWipes may develop mold once a package is opened (shouldn’t be a problem if you go through them quickly, but I would definitely avoid a wipe warmer with these guys, since heat can encourage the growth of bacteria and mold). Some people complain that the fabric of WaterWipes are too rough/dry. They also don’t easily feed out of the container, making them a bit of a pain to get out. 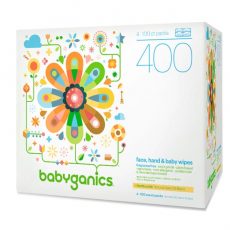 If you are a regular reader of mine, you know I often categorize BabyGanics as Sneaky Stuff. Their wipes, however, are actually not bad, with sodium benzoate being the only questionable ingredients. The wipes are actually a better bet than Seventh Generation in my opinion, although still behind all the Best Stuff and Good Stuff above. 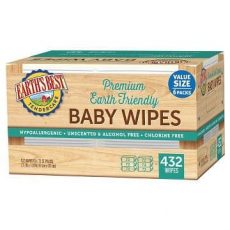 Earth’s Best baby wipes are comprised of essentially the same ingredients as Seventh Generation’s wipes, and in addition they contain alkyl polyglycoside, a substance that has not been tested for safety as far as I can tell (I couldn’t find any studies.) Many people prefer these over the Seventh Generation wipes because they are sudsier. They are available everywhere, including Amazon, where you’ll pay about 5¢ a wipe if you buy in bulk. 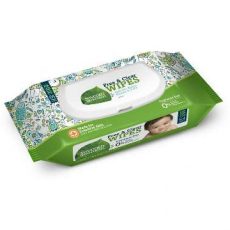 I have used Seventh Generation’s baby wipes, but I don’t like that they contain sodium hydroxymethylglycinate (no, I didn’t just have a seizure while typing–that is actually how it’s spelled). This ingredient has not been assessed for safety, although it scores just a 2 out of 10 on Skin Deep. These wipes also contain sodium benzoate, an ingredient I avoid whenever possible. Basically, Seventh Generation’s wipes are just on the border of being Sneaky Stuff, but they are okay in a pinch. These wipes are widely available, including on Amazon, where you can get them for about 5¢ a wipe if you buy in bulk.

Unsurprisingly, Huggies baby wipes are some of the worst. Even their unscented wipes contain a number of questionable ingredients–including numerous parabens and DMDM hydantoin, a known human immune system toxicant–so don’t be fooled by the natural-sounding varieties (Cucumber and Green Tea, for example). I can barely stomach the scent of these wipes.Pampers is another brand that just doesn’t make any safe wipes, despite their numerous varieties; while a few score only moderate hazard on Skin Deep, the majority are ranked high hazard, thanks to parabens, fragrance, and benzyl alcohol. Even their “Sensitive” label should be avoided, as they include PEG chemicals, sodium benzoate, and other nasties. Oh, and the wipes themselves are made of a plastic blend.

Kirkland wipes, which seem to be many people’s favorite, do have an improved formula as of 2014. Most notably, they now use a safer preservatives and have taken out PEG chemicals and propylene glycol. Still, I don’t like phenoxyethanol or sodium benzoate, so Kirkland wipes are still Bad Stuff in my book–just slightly less bad than they were before.

Huggies Natural Care Baby WipesUpdate: In 2014, the ingredients of Huggies Natural Care were updated, and they ditched the parabens and methylisothiazolionone. Because these wipes still contain phenoxyethanol and cocamidopropyl betaine (which scores a 5 on Skin Deep), they remain in the Sneaky category.Burt’s Bees Baby Bee Wipes contain phenoxythanol, sodium benzoate, and immunotoxic benzyl alcohol.Naty Eco Wipes call themselves “100% eco,” which is a meaningless statement (especially from a brand with a bunch of synthetic ingredients in it!). It’s worth noting that Skin Deep’s rating of these wipes is wrong because Naty has changed their ingredients to be somewhat safer. These wipes actually aren’t THAT bad, but they do contain sodium benzoate and benzoic acid, both of which score a 3 on Skin Deep’s hazard scale.

I’m kind of obsessed with this plastic-free coff