I don’t think you need to slather your baby in lotion after every bath, but sometimes a baby’s dry skin will be screaming for a moisturizer.

As I’ve mentioned before, I’m a huge fan of coconut oil, and we often put a little blob of the organic, unrefined good stuff in the bath with the boys. 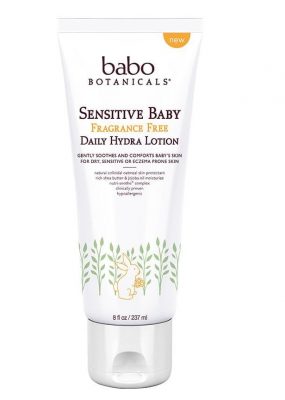 My Top Pick for Best Natural Baby Lotion
If you’re looking for a creamy (not greasy), basic natural baby lotion with no sketchy ingredients, my pick is Babo’s Sensitive Baby Daily Hydra Lotion.

Many readers have written in with their own strategies for keeping dry skin at bay, often without buying packaged lotions or creams. I’m always going to be the type to buy a natural baby lotion rather than lube up my kids with pure olive oil, but these strategies are still helpful:

In addition to some of the above measures, I use a store-bought natural baby lotion on Felix and Wolf after baths (which is the best time to moisturize because skin is already full of water).

If your child summers from eczema, this post covers causes and treatments that our readers swear by.

Since pretty much everyone now knows that phthalates are bad, more and more cosmetics lines—especially those marketed for babies—are free of synthetic fragrance (although lots still do contain them).

Other common ingredients in baby lotion include:

Even lotions sold in health food stores and marketed as natural will contain some of these chemicals. Phenoxyethanol in particular is ubiquitous in “natural” baby lotion.

Coconut Oil: Refined vs. Unrefined and Virgin vs. Extra Virgin 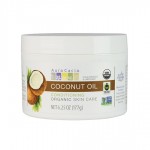 Whether you are buying it to use as skincare or as food, definitely opt for unrefined coconut oil, as the refined variety is deodorized and bleached. Refined coconut oil has a higher smoking point and lacks the coconuty smell and taste, which is why it is sometimes preferred for cooking. And while there is a distinction between virgin and extra virgin olive oil, when it comes to coconut oil, these terms mean the same thing.

While Attitude’s baby lotion has tons of ingredients, many of which are synthetic, they all seem to be super safe. Attitude is also EWG verified. 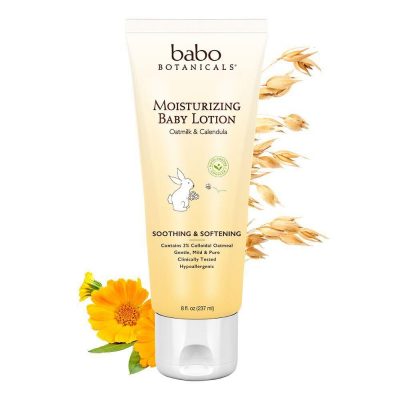 This is my new favorite line, which we are now carrying in our online store. Babo’s line of natural baby lotions are light, smell delicious (but not cloying), and contain none of the bad stuff discussed above. Babo Botanicals products are produced on a certified organic farm in upstate New York. Their lotions contain natural skin softeners like calendula and meadowsweet, and I love their new fragrance-free line.

I’ve been a fan of California Baby for more than ten years, and they continue to make a great line of natural baby lotions.

This Australian line makes a super yummy natural baby lotion (including Soothing, Calming, and Sensitive formulations). You’ll pay about $20 for oughly 4.25 ounces, plus another $20 for them to ship it to you, which I realize is an insane amount of money for a lotion that’s mostly made up of the same ingredients as the other Good Stuff (like calendula and organic lavender oil). I’m including Enkido on this list because I like to support one of the rare companies whose entire line is safe. Almost every single product they sell—from eye makeup remover to anti-aging cream—ranks a 0 on Skin Deep, and nothing scores higher than a 1. 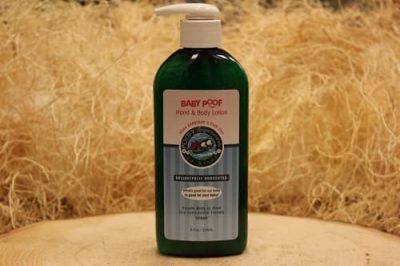 I love that Poofy’s lotions are made to order, which means they don’t need to use hardcore preservatives (although they still have a generous one-year shelf life). This fragrance-free natural baby lotion also has some cool ingredients, including kimchi seaweed and apricot kernel oil. 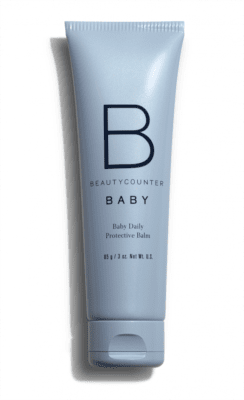 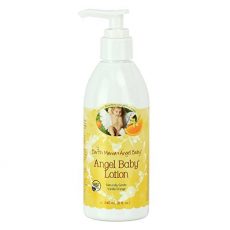 Earth Mama’s Angel Baby lotion smells super yummy (a combo of vanilla and sweet orange oil). Shea butter again makes an appearance here, along with olive oil, aloe, and calendula. Other good stuff about this Good Stuff: it scores a 0 on Skin Deep and all the ingredients are organic. 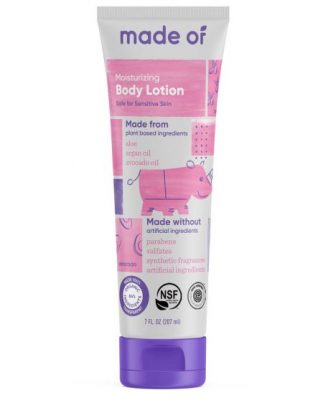 MADE OF Moisturizing Baby Lotion

MADE OF’s Moisturizing Body Lotion contains no synthetic ingredients of any kind, including fragrances or preservatives. It’s also non-greasy and contains soothing ingredients like aloe vera. 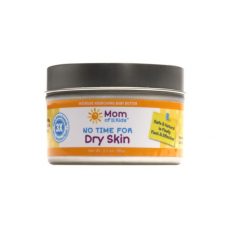 Mom of 11 Kids No Time for Dry Skin is formulated with nine all-natural butters and oils, including coconut oil. It’s no longer available on Amazon, but can be purchased directly from their site. 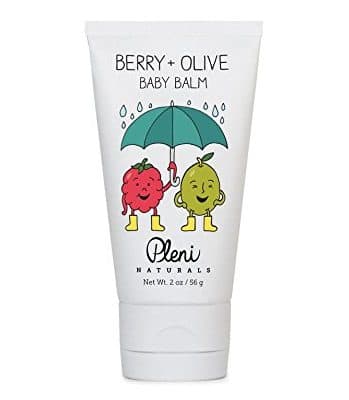 Pleni sent us a sample of their natural baby lotion for review. This is a balm rather than a lotion or cream, but is nice for kiddos with very dry skin. It contains mostly organic ingredients.

You can buy this line on Amazon.

Update: It’s come to our attention that Lac Larde has been using synthetic fragrances due to a dishonest chemist. They are rectifying the problem and we will report back as soon as their formula is safe.

Thinkbaby’s new baby lotion formula doesn’t contain dimethicone, so I can officially call it Good Stuff. Even though the ingredients aren’t organic, they are all low hazard

CeraVe Baby is almost what I would call Okay Stuff, because it’s free of fragrance and parabens. Still, it’s all synthetics, nothing is organic, and it contains dimethicone, phenoxyethanol, and sodium hydroxide.

Eucerin Baby Body Lotion seems to have an identical ingredients list to Cerave Baby, so it’s basically the best of the Bad Stuff, too.

When I wrote this guide in 2010, Johnson’s Lotions contained fragrance, three different kinds of parabens, benzyl alcohol, BHT, propylene glycol, and artificial colors. Things are much improved now! Johnson’s has responded to consumer demand (that’s you guys!), and cut the number of ingredients in their baby line by 50 percent. I also like that they disclose all of their fragrances now, rather than hiding behind the word “fragrance” on the label. Best of all, they’ve ditched the parabens and phthalates! Unfortunately, a bottle of Johnson’s lotion is still going to contain phenoxyethanol and dimethicone, both of which are considered moderately hazardous by EWG. Moreover, a few ingredients in their fragrance blend have no safety data available. Because lotion is something you slather on your baby’s entire body every day and don’t wash off, even the new version of Johnson’s lotions aren’t good enough.

BabyGanics Smooth Move Daily Lotion isn’t totally terrible–but it does contain phenoxyethanol (a possible carcinogen), as well as several other ingredients that Skin Deep rates at least a 3.

A lot of you have asked about Live Clean baby lotion. I can’t recommend it because of several gross ingredients, including “fragrance.”

Mrs. Meyers Baby Blossom Lotion contains fragrance, phenoxyethanol, and ceteareth-20, which is often contaminated with carcinogenic 1,4-dioxane. Despite bragging about aromatherapy all over the label, I knew all of the Mrs. Meyers stuff smelled too good to be true (take a whiff of anything with the geranium scent—it’s heavenly), and so I asked for more details. I was told:

“To answer your question regarding our fragrances – our aromatherapeutic fragrances are a proprietary combination of natural essential oils and synthetic fragrance ingredients formulated in compliance with IFRA / RIFM’s (International Fragrance Association and Research Institute for Fragrance Materials) guidelines for safety. Please note…none of our fragrances contain phthalates.”

Perhaps Skin Deep would lower the score on this product if they knew that it was phthalate-free (they currently give it a 4), but I still don’t feel comfortable using it.

Mustela is fancy and France and calls itself “eco-friendly,” but it also contains “perfum” (AKA fragrance). Mustela did recently remove the parabens from their products.

Puracy makes a baby lotion that many of you have asked us about. Unfortunately, it contains benzisothiazolinone and phenoxyethanol.

You guys ask me all the time about Tubby Todd. With phenoxyethanol and sodium benzoate, Tubby Todd not quite Good Stuff.

Yes to Naturals Baby Body Lotion says it’s 100% natural, but this is flat-out untrue because it has synthetic fragrance and sodium benzoate in it.

What About Baby Oil?


Baby oil is generally a combination of mineral oil (a petroleum byproduct) and synthetic fragrance. According to some sources, it seals up the pores in a way that doesn’t allow skin to breathe effectively. Baby massage oils are now readily available due to the popularity of baby massage (which, along with baby sign language, I never got around to trying). This one from 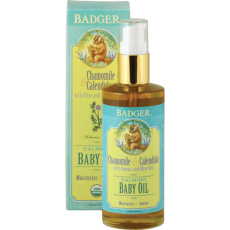 Badger is my favorite.

Check out our Hand & Body Lotion Review for some more clean lotions that are safe for kids and babies.