Why is it that pediatricians advise parents to sleep train their babies when they are 12 weeks old? Probably because it wouldn’t work before that—the baby wouldn’t learn to “self soothe” and the screaming process would repeat every night. Until they are around three months old, babies have no capacity for long-term memory and therefore cannot appreciate repetitive behaviors, much less daily routines.

Of course, if you’re a follower of Dr. William Sears, you won’t ever contemplate sleep training your baby. Like any good attachment parent, you’ll be happily tandem breastfeeding a five-year-old as well as a newborn all night on a king-sized futon.

I practice attachment parenting because it caters to my intuitive understanding of what’s the most natural developmental experience, for both Felix and me. But frankly, it also caters to my laziness – it was easier to nurse on demand than to mix up bottles of formula or drag out the breast pump. It also was easier to allow Felix to sleep in our bed, where I could roll over and nurse every couple of hours instead of stumbling down to a nursery four or five times each night.

The Problem with Co-Sleeping 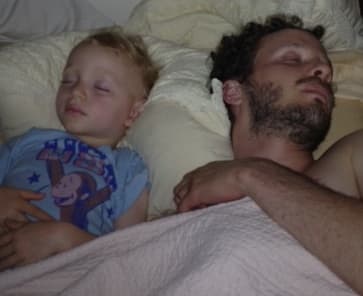 Because babies do begin to recognize routines at the three-month mark, the ones that form at this stage can be difficult to break. Any parent who has allowed their baby to join them in bed will attest to this, probably with a grim countenance of weariness and doubt.

Of course, it’s not sharing a bed with your baby that’s the problem. More likely, it’s the all-night nursing party that turns otherwise sane women into simpering, irritable, intolerant shrews. In prehistoric times, women who nursed their children all night were likely able to nap during the day while family helped with childcare. The gutting twist of our “gender equality” is that modern moms are expected to go work each morning in a nap-free office or (arguably even harder) hang solo with the baby all day.

The Problem with Sleep Training

Theoretically, I’m against sleep training; intuitively, I know there’s no benefit to a baby being left alone in a room to scream himself to sleep. Studies both confirm and refute this hunch, but I don’t need proof to convince me that Felix is better off not being forced to cry it out. Given the demand of modern motherhood, however, many of us could probably benefit from…let’s call them sleep “exercises.”

When you look at the current popular theories on sleep training (Weissbluth, Ferber, Sears, Pantley) they seem to be either unduly complex or totally oversimplified.

What worked for us was Dr. Jay Gordon’s method, (I have blogged about this before), which essentially consists of night weaning while continuing to co-sleep. What’s so incredible is that once a child learns he will not be able to nurse in the middle of the night, he just stops waking up! I am addicted to Felix’s snuggles, and am now in no rush to get him out of our bed.

The crushing fatigue I suffered during Felix’s first couple of years is less unbearable in memory than it was in reality. Still, I plan to employ Dr. Gordon’s methods a little earlier with any future kid my husband and I have. This is assuming, of course, that Felix ever moves to his own bed and gives us a chance to conceive another child.