Home > Posts > When Will My Pre-Pregnancy Jeans Fit Me? 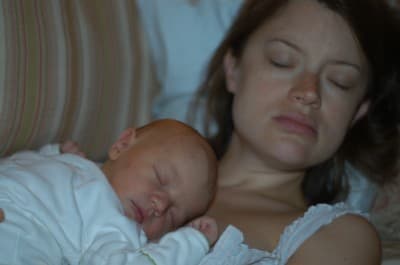 This is all I did when Felix was a newborn. This and eating.

My second son is 6 months old, and I’m just about back to my pre-pregnancy weight. I think it happened slightly faster this time, probably because instead of lying around nursing and stuffing my face, I’m schlepping two kids around the city for all of the four-year-old’s activities. I found the following journal entry on my first postpartum experience, when several months in I was still far from my normal weight.

A couple of weeks ago, I finally resigned myself to the fact that my pre-pregnancy jeans officially donʼt fit, and perhaps they never will. I can squeeze into a pair or two, but when I do, the desire to take a full breath is just too great, and with it the temptation to slip back into pajamas.

I recently upgraded to some “yoga pants,” which are just glorified sweatpants (even Lululemons felt too restrictive). Instead of trying on my old J.Brands daily, I decided to admit defeat and buy a new pair of bigger jeans to wear with the Salcony running shoes I lace up each day before walking no further than the lobby of my building to get the mail.

I was pleasantly surprised to find a pair of Paige jeans that fit perfectly and were only one size bigger than the ones I wore back when I had occasion to get dressed in the morning. I happily slapped down a weekʼs worth of grocery money for them, and was happy to discover that they only became restrictive if I polished off a box of truffles (not such a rare occurrence) or when I wore my sexy thermal union suit under my clothes (itʼs COLD this winter!). I donʼt wear the new pants that often because, letʼs be honest, jeans never really deserved the reputation of comfort clothing, at least not after youʼve lived in those amazingly soft disposable hospital undies, flannel pj pants, and often no top at all for a few weeks (this last part thanks to intense pain in the early days of breastfeeding).

In any event, it was great to fit into a pair of pants that donʼt look like my grandmother should be wearing them.

Until I saw my husband wearing them.

Apparently, while I lounged on the couch last Wednesday watching a DVRed episode of The Little Couple, our new cleaning lady assumed my new pants to be a pair of Daylonʼs, and stacked them in his dresser, from which he grabbed the when he was– thoughtful, kind man that he is–getting dressed in the dark early this morning so as not to wake me. When he came home from work, and I noticed the jeans–my jeans–actually SAGGING on his ass, I literally choked on the milkshake Iʼd had him pick up for me on his way home. He proceeded to show me how he could pull them off of his hips without unbuttoning them, so I filed for divorce.

One thing did make me feel slightly better: the next morning, when I opened my dresser, there were rows of Daylonʼs favorite tighty-whities lined my drawer, clearly having been mistaken for womenʼs bikini briefs.

Here are a few of the badass women I’m missing seeing today on International Women’s Day. Lucky for me, they are my family—including my amazing niece who was in my SIL’s belly when this photo was taken. ❤️ #internationalwomensday ...