“Screen time” is something both of my children struggle to manage for their own children. As a grandmother who spends a lot of time with my grandsons, I feel their pain! It often feels like a constant battle to keep Felix, Theo, Wolfie, and Lincoln away from TVs, iPads, and phones!

Louv spent 10 years traveling and interviewing parents and children about their time spent in nature. His conclusion is that sensational media coverage and paranoid parents have literally, “scared children out of the woods and fields,” while promoting a litigious culture of fear that favors “safe” regimented sports over imaginative play. I would add that busy working parents and lots of attractive smartphone and tablet screens have only added to this dilemma! 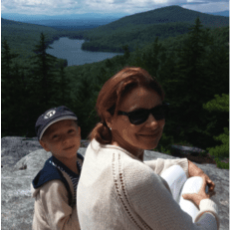 As a child in the 1950’s, I was sent outside after school every day, and all day long in the summer, to play. We didn’t have a toy room, but we had board games, playing cards, dolls, and toy soldiers. With our only screen time being Saturday morning cartoons, there was a lot more for us to do outdoors. Our parents might be seen, by today’s standards, as less protective. Our neighborhood seemed far less “dangerous” then, even though, in fact, it has not changed much since.

When I had my own children in the 1980’s (making them millennials), I was much more protective than my parents had been. I opted to stay home with my children, and I took them outside every day to make sure that they had time in nature. My grown children today don’t have that luxury with their own kids because they both work, and they struggle with keeping their children off screens and giving them time in nature.

Even with less unstructured time outside being the norm, we can find ways to increase a child’s time in nature. There are some organized opportunities to give children that time. Last week, I accompanied my daughter to “Forest School” in Brooklyn with her 2-year-old. During this outdoor program, the teachers didn’t direct children; they just had a place in the woods of a park where the children could play with nature. Sticks, mud, fallen nuts, leaves, wooden spoons, and little tin buckets were placed under a tree in the dirt. All of the 2-year-olds immediately were on the ground playing. It was even raining a bit, which made the mud all the more fun! It’s so much easier parenting in nature. Children just naturally are entertained…just like they are with screens, in fact! The moms (and one dad) were free to chat or observe their children–when inside, kids seem much more demanding of adult attention, don’t you think?

Just yesterday, I spent time with my son’s 4-year-old boy, who is only allowed screen time for an hour at 3:00 p.m. each day. We went to the library and then to a field to fly a kite. He loved the kite-flying, but afterward was playing his own made-up games that included jumping off of rocks, rolling down a grassy hill, playing shadow games, and following a jumping grasshopper. Although many of his games were peppered with superhero moves he learned from the screen, he was making up his own games with them.

As time passed, he once mentioned that he wanted to go home for his screen time, but he kept finding new games to play outdoors and he didn’t want to go home until 5:00 p.m. My son was thrilled because by the time we got home, it was time for dinner and bed (no time for screen time that day!).

With the pace and pressures of modern life, it’s often difficult to get the kids outside even though we know how good it is for them, and us!

You can incorporate some of these activities on a walk to school as I did the other day with my grandson, hunting under every oak tree for the perfect acorn to take home. 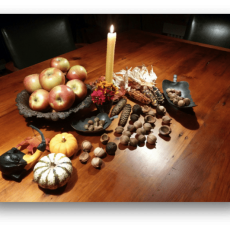 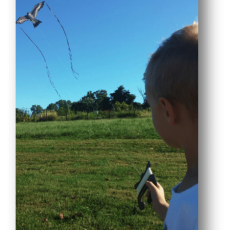 For an extra treat, watch the trees for a windy day and try kite flying with your little ones.

Winter is just around the corner, and in upcoming blog posts I will focus on limiting screen time in the winter months.