You’ve probably heard by now that Honest Company detergent was recently found, by two independent lab tests, to contain sodium lauryl sulfate (SLS), a foaming agent that Jessica Alba has called “toxic.”
I have three quick things to say about this: 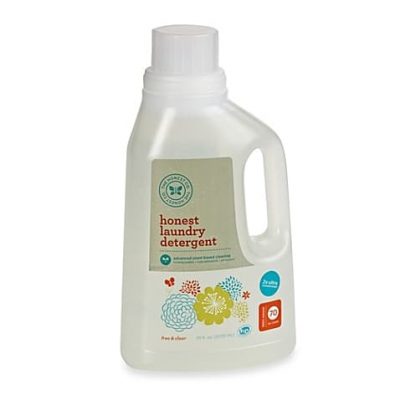 1) In our review, I listed Honest’s detergent as “possibly sneaky” since we couldn’t confirm what exactly they use as a surfactant–now we know! I am glad that we didn’t list it as Good Stuff in our Safe Laundry Detergent Guide.
2) That said, I am not actually that worried about SLS, so for those of you who love Honest detergent, I wouldn’t say you necessarily need to switch brands. (It’s sodium laureth sulfate, or SLES, that’s the really Bad Stuff, in my opinion, mostly because it is usually contaminated with carcinogenic 1,4-dioxane).
3) Despite SLS being a low-concern ingredient, this scandal certainly brings to light how complicated the supply chains are for huge companies like Honest, who private labels their detergent from Earth Friendly Products, which in turn gets its materials from a chemical supplier called Trichromatic West.
Especially on the heels of the Ava Anderson scandal, is upsetting to learn–again–that what’s on the label may not reflect what’s in a product (even though I believe that Jessica Alba was unaware of the SLS in her detergent, as she states.)
This is why my favorite products are always from small-batch companies. For what it’s worth, the detergent I use is Tandi’s Naturals, and I love it (apparently so do many of you, because it’s among our stores best-selling products). This also makes me appreciate companies like Beautycounter, who test their products AFTER production for purity.