One of Felix’s first words was “kombucha,” which should tell you how often he sees me drinking the fermented tea.

Some purported benefits of drinking kombucha–which has been around for more than 2,000 years–include:

Kombucha is also known to be a liver detoxifyer. On a recent Friday evening when my best friend from college, Mike, came over, we decided to mitigate some of the toxic effects of the vodka we planned to drink by mixing it with with kombucha. Other benefits of making a Cosmo-like drink with kombucha instead of cranberry juice: 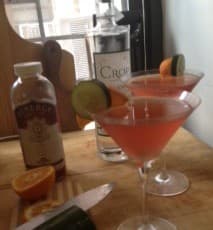 Of course, I drink my kombucha virgin style–it’s a wonderfully refreshing alternative to water or soft drinks on these stifling summer days.