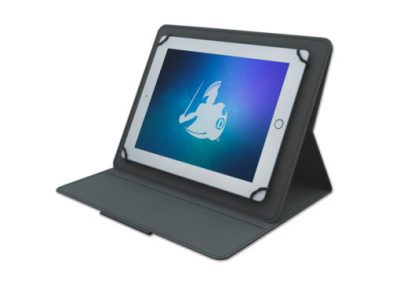 The DefenderShield® Universal Tablet Radiation Protection Case and iPad Radiation Shield blocks up to virtually 100% of harmful tablet EMF radiation from the back of your tablet. This handcrafted case contains state-of-the-art radiation shielding technology while offering a soft microfiber interior and an elegant vegan leather exterior resistive to scratching, staining and the accidental drop.

The DefenderShield® Universal Tablet Radiation Protection Case and iPad Radiation Shield is uniquely structured to provide total protection from the radiation emitted from the back of your tablet. Backed by FCC certified lab testing, its state-of-the-art technology blocks up to virtually 100% of the full frequency spectrum of harmful Electromagnetic Radiation (EMF) from 0-10 GHz which includes:

The DefenderShield® folio case is the only tablet computer radiation shield capable of protecting all forms of tablet radiation.

Just use the DefenderShield® Universal Tablet PC Radiation Protection Case while using your tablet in your lap to protect yourself from a broad spectrum of potentially harmful tablet radiation emissions.

Compatible with most tablet computers including iPad, Nexus, Galaxy, Kindle and Nook.