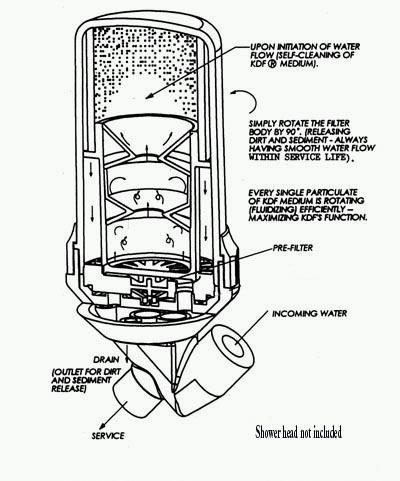 Join the waitlist to be emailed when this product becomes available

Our skin can absorb as much chlorine from one shower as our stomachs absorb by drinking chlorinated water all day! If you are filtering your drinking/cooking water, it makes sense to also filter your shower water. Chlorine can also make skin dry and flaky. It can make hair dry and brittle, and ruin hair coloring.

Because children are more profoundly affected by chlorine than adults are, in our home we use a shower filter with a shower head on a hose so that we can even filter water for baths by simply dropping the hose into the tub and filling it that way.

Gimme the Good Stuff’s shower filter is a premium KDF unit that removes chlorine as well as various particulates. This filter has been shown to effectively remove more than 97% of this damaging chlorine for up to 12 months for two people. It has been tested by an independent lab to ANSI/NSF 42-2000 Class I to 10,000 gallons. KDF can also remove low amounts iron, sulphur, and control the mold and mildew in your shower.

KDF is well-suited for shower water filtration because as water temperature increases, the efficiency  of the KDF increases as well. Carbon, used in other brands, is most effective in water temperatures between 50 and 80 degrees, and most of us shower at around 100 degrees. We believe that KDF is the best media choice for shower filters, and the special interior design of this shower filter causes the KDF to be “swirled,” enhancing contact with the water which improves efficiency. 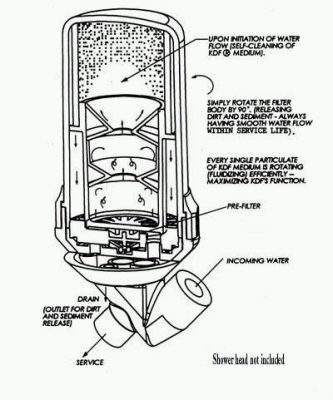 A unique feature of this filtre is the “Quick Flush” back-wash. Simply twisting the cartridge to the “Flush” mark will reverse the flow “back-wash” to release the sediment that can cause other shower filters to fail prematurely. (This is particularly relevant for New Yorkers, where century-old pipes contribute to excessively high sediment levels. Non-backwash shower filters will clog up in a couple of months, but this filter should last a year.)

Read more about why you should filter the water in your home.