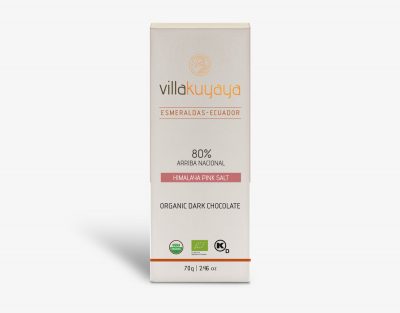 Villakuyaya uses the Arriba Nacional Cacao beans of Esmeraldas that are one of the fruitiest in the regions of Ecuador.

This allows the consumer to taste the original flavors that the farmers plant around the cacao tree. Villakuyaya organic dark chocolate has all the explosion of the Fine de Aroma cacao bean with the fruitiness of the other plants like banana, mango, red fruits and citrus. Esmeraldas is located on the north pacific coast of Ecuador, so-called because of the greenery of its jungle, its rivers, and its sea.

Its farmers are full of enthusiasm to have cacao “Fine of Aroma” within their location since it is considered the variety with the most denomination of origin our cacao grows in yellow and granular pods.

Its plantations also have other fruit plants such as mango, bananas and red fruits that make the particularity of the fruit, floral, profiles and after taste of spicy and twisted walnut of cocoa.

Esmeraldas is located in the north pacific coast of Ecuador, so called because of the greenery of its jungle, its rivers and its sea.