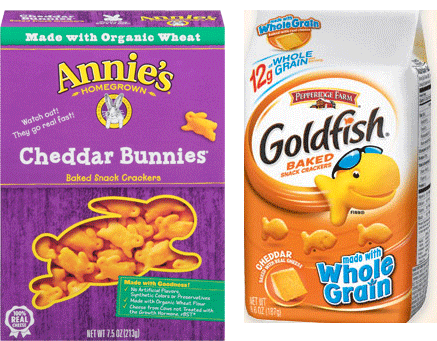 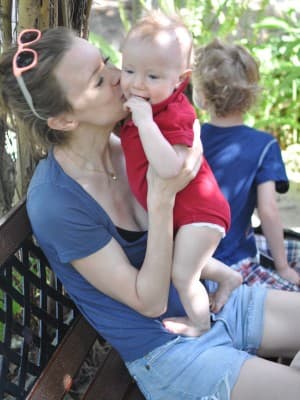 Ironically, the proliferation of “healthy” baby and kid snacks seems to have made it more difficult to keep my children on a clean diet. Perhaps without the convenience of all the organic, natural, trans-fat free packaged foods, I would be more likely to offer my kids homemade snacks that are actually nutritious (such as this or this). Instead, I often find myself smugly selecting organic gummy fruit snacks from the shelf at Whole Foods (while silently congratulating myself for giving them something free of artificial colors and flavors!).

Cheddar Bunnies: The Goldfish of This Generation

The snack I see kids eating most often in my Brooklyn neighborhood is Annie’s Cheddar Bunnies. From infants in strollers to fifth graders on skateboards, it seems no one is immune to the addictive quality of these little cheese crackers, and my kids are no exception.

While I never buy Pepperidge Farm Goldfish crackers, the similar-tasting Cheddar Bunnies are something of a staple in our snack cupboard. And I’ve long wondered if they are actually any more healthful than Goldfish (which you cannot buy at Whole Foods or most natural foods stores).

I recently set to find out if I am justified in my smugness of eschewing Goldfish in favor of Cheddar Bunnies. Here’s what I considered, and which snack cracker came out on top.

Cheddar Bunnies Vs. Goldfish: Which Is Healthier?

Cheddar Bunnies Vs. Goldfish: Which is More Healthful?

1. Oils. Goldfish crackers used to contain trans fats, but the partially-hydrogenated oils were removed in 2014. Prior to this point, Cheddar Bunnies had a distinct leg up on Goldfish, and they still maintain a small advantage: sunflower oil (found in Cheddar Bunnies) is a healthier fat than canola and soybean oils (found in Goldfish).
Winner: Cheddar Bunnies

2. Fat grams. Cheddar Bunnies have slightly more fat and saturated fat than Goldfish do (7 grams versus 6 grams of fat and 1 gram versus half a gram of saturated fat). If you’re counting fat grams, we can let Goldfish win this category.
Winner: Goldfish

3. Salt. The sodium content of Cheddar Bunnies and Goldfish is identical and WAY too much at 250 mg per serving. The rest of the nutritional content is basically the same in Goldfish and Cheddar Bunnies (carbs, fiber, calcium, protein, vitamins, etc.)
Winner: Tie

4. Sugar. Goldfish’s ingredients list includes sugar, although the grams per serving are still less than 1. Cheddar Bunnies do not contain any added sugar.
Winner: Cheddar Bunnies

6. Pesticides. There are two types of Cheddar Bunnies—make sure you opt for the organic variety when buying this snack. Pesticide exposure in small children has an oversized impact, and has been implicated in ADHD, among other ills. There is no organic version of Goldfish (although it’s probably just a matter of time).
Winner: Cheddar Bunnies (even the non-organic version contains organic wheat)

7. Other ingredients. The rest of the ingredients in the original flavors of both Cheddar Bunnies and Goldfish are very similar: wheat flour (not to be confused with whole wheat flour), cheese, milk, and some natural colorants and spices.
Winner: Tie

Go ahead and feel smug, Brooklyn mommas! Cheddar Bunnies are indeed healthier than Goldfish. However, neither snack should be considered nutritious, and in an ideal world even Cheddar Bunnies would be an occasional treat rather than a dietary staple. If you want some easy, quick snack options that are actually healthful, here’s a great list from my mom the health coach.

P.S.: Does anyone think that Goldfish are way tastier than Cheddar Bunnies, by the way? Just an observation as someone who has consumed a fair amount of both crackers in her lifetime.

P.P.S.: I checked EWG’s FoodScore database, and Goldfish get a 6 (where 1 is best and 10 is worst) and organic Cheddar Bunnies score a 4. 5, non-organic a 5. I basically agree with this evaluation.