Home » Posts » Phthalates in Mac and Cheese: Should We Panic?

Phthalates in Mac and Cheese: Should We Panic?

Did you guys catch me on The Dr. Oz Show yesterday? I was invited to speak about phthalates in macaroni and cheese. Whether or not you saw the segment, I thought you might want to hear my thoughts on the scary headlines.

Real Quick: Here’s What Phthalates Even Are

The chemical compounds know as phthalates (pronounced f-THAL- lates) are used to make plastics flexible and as lubricants in cosmetics.
There are many types of phthalates, among them di-(2- ethylhexyl) phthalate, aka DEHP, which is the type that was found in the highest concentrations in boxed macaroni and cheese (FYI: you won’t see any phthalates listed on a label). 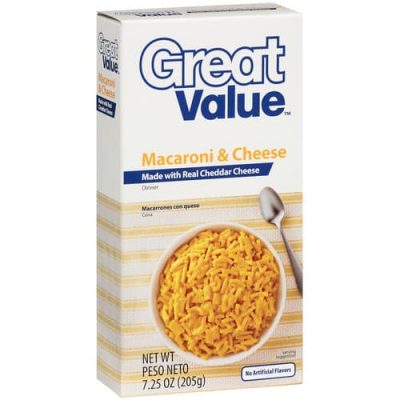 Why Should You Worry About Phthalates?

The effect of phthalates has been observed since the 1940s, and phthalates are now widely known to be endocrine disruptors, aka chemicals that interfere with the function of hormones. You can find plenty of studies to support the claim that phthalates contribute to a range of health problems, including abnormal sexual development, reproductive birth defects, premature breast development, and increased waist circumference and insulin resistance.

Phthalates in Mac and Cheese: What and How?

Back in July, a study on high phthalate levels in boxed macaroni and cheese grabbed headlines everywhere. Specifically, DEHP was found to be present in an average of 295 parts per billion in the powdered cheese tested (including organic brands, none of which were disclosed).

I wasn’t surprised by this, although I do feed my kids boxed mac and cheese at least once a month (this one, because the shells are whole wheat). Why wasn’t I surprised? Well, for one thing, we know that dairy in general is contaminated with phthalates, probably from the tubing used to milk cows.

Last year, I sent some samples of milk to a lab to test for DEHP. The results showed that milk fresh out of the cow had ten times fewer phthalates than the milk in the tank of that same farm (in other words, the milk that had gone through the plastic tubing used for milking). 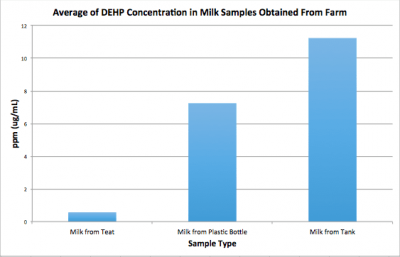 Still, the mac and cheese study showed something even more striking: compared with cheese in its natural state (a block of cheddar, say), the powdered variety contained four times as much DEHP. My best guess is that whatever equipment is used to turn the cheese into powder is introducing even more phthalates—the total concentration is still relatively small, but not small enough in my opinion. (I did look into the pouches that the cheese comes in as a possible source of exposure, but they don’t contain DEHP).

Should We Stop Buying Macaroni and Cheese?

So in light of all of this, should we all stop feeding our kids boxed macaroni and cheese? Well, if health is your only concern then the answer is “yes, of course,” just like we should never eat ice cream or get a manicure.

Macaroni and cheese isn’t a health food and shouldn’t be confused as such, even if you’re buying the organic variety. But the truth is, I don’t really think boxed mac and cheese is a major mode of phthalates exposure for most of us; unfortunately, this class of chemicals is just so prevalent, that we are all being hit from all angles.

Where Else You’ll Find Phthalates

In addition to your mac and cheese, you’ll find phthalates almost anything that smells nice (from shampoo to air fresheners to laundry detergent), nail polish, insect repellent, carpeting, vinyl flooring, the coating on wires and cables, shower curtains, raincoats, some plastic toys, your car’s steering wheel, tap water that’s been tainted by industrial waste, and in the pesticides sprayed on conventional fruits and vegetables.

In fact, about a billion pounds of phthalates are produced every year, and ninety-five percent of us have detectable levels of phthalates in our urine.

So, you can see that these suckers are pretty much impossible to avoid. But that doesn’t mean there is nothing you can do!

If you want to cut your family’s exposure to DEHP and other phthalates, you might try to:

So, to sum it all up, here’s how I feel about DEHP in your macaroni and cheese: Because of the ubiquity of phthalates in our environment, eating mac and cheese once a week or so probably won’t pose an increased health risk. Still, this is a reminder that more you can cook at home, the better. And, if you really want to avoid phthalates, keep your home as dust-free as you can.

So, basically, I’m saying we moms should all cook and clean more. Some feminist I am! But seriously, I do believe that by tackling the big sources of exposure (when it comes to phthalates, I’d say that’s dust and fragrances), we can relax a little on all of the stuff that’s so much harder to control, and still significantly reduce our exposure to phthalates and other environmental toxins. 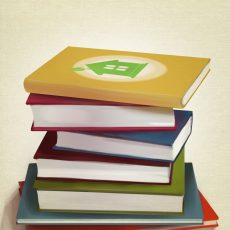 P.S. If you’re looking for a quick, straighforward way to detox your home of the worst stuff, here’s an e-book to consider.

6 responses to “Phthalates in Mac and Cheese: Should We Panic?”