Children seem to move through “food kicks.” They’ll eat a particular food for a while and then a week later they suddenly stop liking it. Or sometimes they’ll hone in on a particular food and will eat only that.

My grandsons Felix and Theo both go through stages where they want only waffles for breakfast, and their parents try to find the healthiest frozen organic waffles on hand for busy mornings.

Unfortunately, even the organic varieties for frozen waffles (by Van’s, Nature’s Path, Earth’s Best, etc.) aren’t really The Good Stuff, because they all contain sugar, in addition to a bunch of other not-so-healthful ingredients, like canola oil, sunflower or soy lecithin, and soybean oil.

Organic frozen waffles are never 100% whole grain, either. And they certainly aren’t made of sprouted flour, which if you’ve read my blog posts you know I love (it actually digests like a vegetable!). More on sprouted flour in a minute.

When Felix visits me, he requests waffles every single morning. He never tires of them! My goal is always to steer away from food battles with kids, and if there is something that they really enjoy, I’ll try to make the healthiest version possible.

Waffles are actually much easier to make than pancakes (the iron does the work for you!), and one way to make really healthful waffles is to use sprouted flour.

Sprouted flour is obtained by milling seeds of grain (grass) that have germinated into living plants. Because it is made from the entire grain, including the bran, germ, and endosperm, sprouted flour is a nutrient-dense source of nourishment that digests as a vegetable rather than a starch!

If you would like to read more about the health benefits of sprouted flour, I love Janie Quinn’s cookbooks.

(Sprouted flour can sometimes be hard to find, but here’s one that’s on Amazon).

When Felix and I make our waffles, we start with the sprouted flour and then we have whatever fruit is in season with our waffles. Until the spring berries start arriving, we use apples with a little cinnamon.

I use organic eggs and for Felix, who eats dairy, I use plain yogurt and a little melted ghee or butter for the wet ingredients. I have made them with almond milk and coconut oil too and they are just as delicious. (I will provide the full recipe below.)

For toppings, you can just use fresh fruit (sometimes I use frozen blueberries in the winter) and/or you can use a little maple or honey.

I like to pile my waffles with fresh fruit and a little yogurt; Felix prefers his plain with a little maple syrup and his fruit on the side.

Felix loves mixing ingredients, beating the eggs, and adding the liquid to the dry. But, part of the fascination with waffles for kids is the waffle iron and this beautiful waffle that forms from a large spoonful of liquid. Felix loves watching for the green light that signifies his waffle is ready.

When Maia uses this recipe, she doubles it, pops half the waffles in the freezer in these bags, and then has easy frozen organic waffles that are seriously healthful on hand.

What About Boxed Waffles? 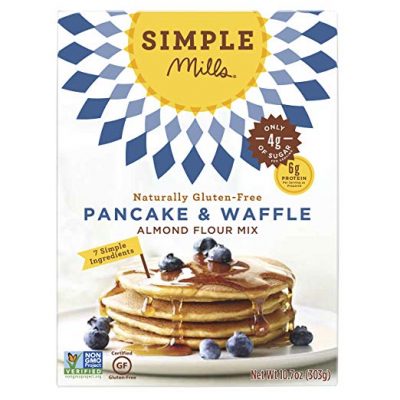 Maia recently discovered this amazing brand of waffle mix. It contains mostly just almond flour (so is gluten-free), as well as coconut sugar and flour. And the waffles it makes are shockingly white and fluffy!

A Note on Waffle Irons

If you want to use a Good-Stuff approved waffle iron, you’ll go for a cast iron one like this. Otherwise, it’ll be a toxic nonstick variety, but I admit that we use the Bad Stuff in this case (this one) simply for the convenience.