My six-year-old, Felix, is allergic to peanuts. Due to very low Ieg levels in his blood, we are hopeful that he may outgrow it, but it still really sucks to have to worry about it for now. (Also—what about the protective effects of long-term breastfeeding?!) I am probably as concerned about the psychological effects of a food allergy as I am about the possibility of an anaphylactic reaction, so I was relieved when my two-year-old, Wolfie, tested negative for peanut allergy.

Our allergist told us to start feeding Wolfie peanuts as much as possible to prevent the development of a future allergy (he’s at a higher risk because of Felix). Unfortunately, Wolfie is not a fan of peanut butter, so this proved difficult.

Right around the time we found out that Woflie wasn’t allergic to peanuts, I happened to hear from a woman named Zoi Maroudas, who founded a baby food company called Bambino’s. She wanted us to review her baby food for possible inclusion in our Safe Baby Food Guide.

After looking into Bambino’s products–and receiving samples, which we fed to my 6-month-old nephew, Lincoln–I deemed Bambino’s organic frozen food the Good Stuff (see our Safe Frozen Baby Food Guide for more on this baby food as well as other brands that get our approval).

If you can’t prepare your baby’s food fresh (which I rarely did, after so much was refused and thrown away!), frozen is the next best option. It’s definitely better than the purees you’d get in pouches or jars. And Bambino’s is about as good as it gets. 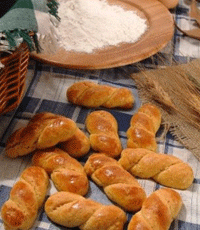 What intrigued me most about the Bambino’s lineup wasn’t any of the organic vegetable, fish, or high-quality meat options. It was something called peanut mani.

Zoi says these cookies contain the exact amount of peanut recommended to prevent peanut allergies in children. You’ve probably seen the headlines that Israeli children rarely suffer from peanut allergies, and the theory is that it’s because of early exposure to peanut snacks called Bamba.

Intuitively, this theory makes sense, and I would encourage all parents to introduce nuts early (after, of course, checking with your pediatrician). Bambino’s peanut mani are also Good Stuff because they are organic and are lightly sweetened with oranges 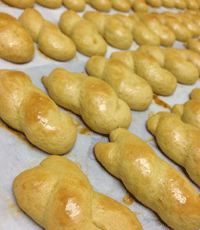 and carrots instead of sugar. The idea is that you give your child one cookie each day starting at four months old to help prevent the development of a peanut allergy.

Zoi has offered to include a free gift for orders—for peanut mani as well as frozen baby food–made by my readers. Just you code GIMMEGOODS when checking out.