Home » Posts » BPA-Free Cans: What Are They Using Instead?

BPA-Free Cans: What Are They Using Instead?

When I recently read some posts on social media that lauded companies that aren’t using BPA in the linings of their cans, I couldn’t help but wonder…what are these companies using instead? So one of my staffers spent the last couple of weeks calling the makers of products that come in BPA-free cans—she asked questions about the materials they use, and then I did some digging about the safety of these materials.

Are any of these canned goods truly Good Stuff, or is it just a bunch more Sneaky Stuff?

Here’s what I found out.

For those of you who still aren’t sure what BPA stands for or is or why it’s scary, here’s what you need to know:

What About BPA Replacements?

So clearly we don’t want BPA touching our food, particularly food that’s acidic (like tomatoes). But consumers usually aren’t aware that many BPA-free products contain a different bisphenol, such as bisphenol S (BPS), which may actually be worse than BPA, bisphenol B (BPB), bisphenol A diglycidyl ether (BADGE), bisphenol F (BPF), or bisphenol F diglycidyl ether (BFDGE). For this reason, I tell my clients to avoid all plastics as much as possible when it comes to food storage and preparation.

But what about canned foods from companies that advertise their packaging as BPA-free? What are they using instead, and is it safe? Here’s the deal…

Companies Using BPA-Free Cans…What Are They Using Instead? 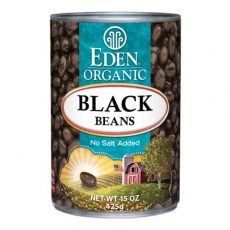 There was only one brand of all of the ones we researched that qualifies as Good Stuff: Eden Organics, which has been quietly using BPA-free lining since 1999. Instead of using BPS, vinyl, acrylic, or polyester to line the cans for their beans, Eden chose the more expensive “baked-on oleoresinous c-enamel,” which is a form of plant resin. Unfortunately, this enamel doesn’t work well for acidic foods, so Eden’s canned tomato products should be avoided, as those linings contain BPA.

You can buy Eden beans on Thrive for wholesale prices:

So What Should You Do?

I have been working to eliminate my family’s exposure to BPA in our home—my logic is that we eat in restaurants enough to get our fair share there, where I have no control over which canned products are used to make our meal.

Here’s how you can reduce your family’s BPA exposure from canned foods:

31 responses to “BPA-Free Cans: What Are They Using Instead?”