Recently, I tagged along with my husband when he went to Europe for a business trip. Our first stop, Budapest, had long been on my bucket list, and it didn’t disappoint. Thanks to its small size, we were really able to really experience the magic of Budapest in just two days.

Our trip began when we left the kids with my parents on Tuesday afternoon. As every parent knows, traveling is part of the vacation when you fly without children, and we were psyched even in the cab on the way to JFK. We had a quick layover in Helsinki, flew over the Alps, and caught a little more sleep before landing in Budapest.

A quick cab ride later we arrived at the Aria Hotel, which was just as incredible as the reviews had suggested. Check-in was easy, the lobby was gorgeous and our room (in the “Classical wing”) featured charming street view, a luxurious bathroom, and an INCREDIBLY comfortable bed. 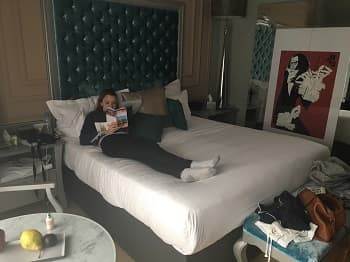 During our stay at the Aria, we enjoyed the spa, including hot tubs and saunas, as well as massage services—I would highly recommend the entirely organic grapeseed oil facial.

The hotel also offers a wonderful complimentary breakfast, complete with cappuccinos and omelettes, and an equally impressive wine and cheese spread with live music each day.

Where to Eat in Budapest

Despite our quick stay, we were able to sample a lot of different cuisines in Budapest. As a non-red-meat eater, I didn’t taste a lot of the highlighted Hungarian food, but my husband’s overall impression of classic Hungarian dishes was, meh, so I don’t think I missed much.

One day we had lunch at the famous Gerbeaud Café, which seemed a bit overpriced for what it was. On the other hand, we had a delicious meal at Nobu the next day, where we split the lunch bento box and therefore didn’t completely break the bank. 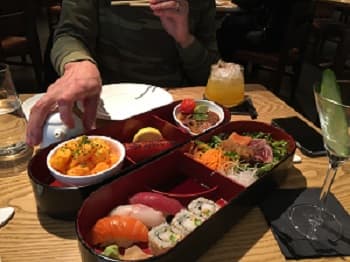 We really enjoyed our dinner at the Michelin-starred Costes Downtown, despite the fact that all of my vegetables were swimming in heavy (albeit delicious!) sauces. 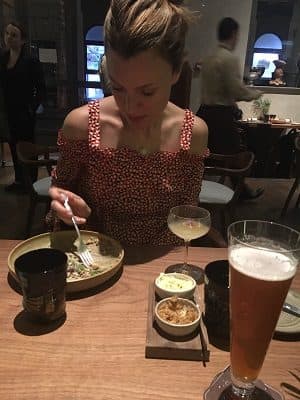 Our final dinner in Budapest was at a low-key beer café called Moosselen, where I enjoyed a surprisingly tasty lentil and cheese dish. We finished with dessert at the famous Central Café (AKA Central Kevehaz), which also featured live music.

If you have food allergies, by the way, the Hungarians seem super tuned into this risk: all of our waiters asked about any allergies we might have, and the menus had lots of information about potential allergens. 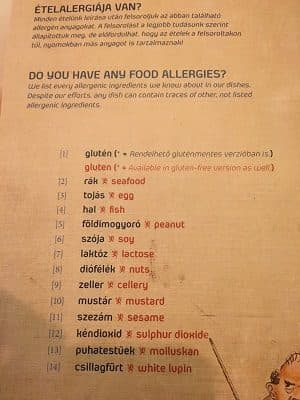 We spent each of our days in Budapest getting from place to place by Budapest’s easy public transportation system—from the underground train to the trams. We felt like big shots navigating the system while being unable to read a word of Hungarian, right up until the part where we didn’t pay for our ride before getting on the train and wound up with a hefty ticket from some extremely unfriendly city workers. 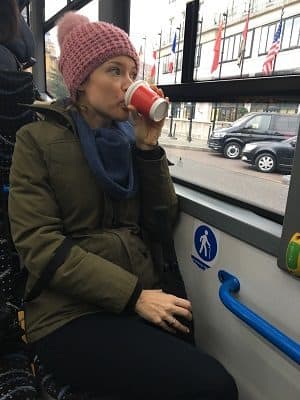 What to See & Do In Budapest

While I am sure Budapest is lovely in the summer, one major upside to being there in chilly and dark November was the lovely Christmas fair. We especially enjoyed perusing the stands of handmade toys (which were less than half the price of what you’ll pay for wooden toys here in the U.S.), and charming food vendors selling everything from mulled wine to roasted chestnuts. 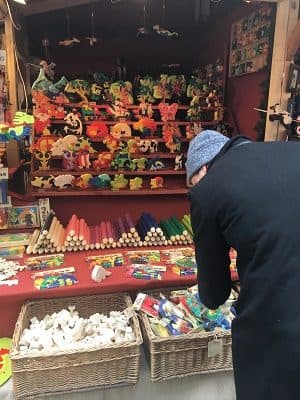 Another highlight of the trip was our time spent in Buda. Since our hotel was on the Pest side of the Danube, we walked over the stunning Chain Bridge and then explored the hilly, historic Buda side of the city.

The incredible views from Fisherman’s Bastion shouldn’t be missed, and I thought The Hungarian National Gallery was the best museum this city had to offer. We also loved simply strolling the charming cobbled streets of Buda; our favorite was Orszaghaz utca.

Back over on the Pest side, one sightseeing highlight was the stunning St. Stephen’s Basilica, just a few blocks from the Aria Hotel. And of course no trip to Budapest would be complete with a visit to the thermal baths. We chose Szechenyi because it’s the oldest in the city.

All in all, Even though we only had a couple of days in Budapest, my husband and I both left the city with the sense that we’d really gotten a feel for both the historic beauty of Budapest—like the breathtaking parliament building when it was lit up at night—as well as what makes modern Budapest so special—from high end cuisine to cozy beer pubs.

4 responses to “Finding the Good Stuff in Budapest, Hungary”