I recently wrote this article for my Huffington Post blog.

If you’re like me, you’re already failing at most of your New Year’s resolutions (I’m still not making my bed every day, and I haven’t been to a yoga class yet in January). One goal that I am tackling in earnest? Banishing phthalates from my home once and for all.  I’ve always advised readers to avoid these chemicals, and this year it moved to the top of my resolution list. Unfortunately, ridding my house of phthalates is proving to be much, much more difficult than I’d hoped.

For several years now we’ve been hearing about the mysterious, ubiquitous, and hard to spell chemical compounds know as phthalates (pronounced f-THAL-lates), which are used to make plastics flexible and as lubricants in cosmetics.

Most of us have the general idea that we should avoid phthalates, but we aren’t certain why, and (more importantly) how. 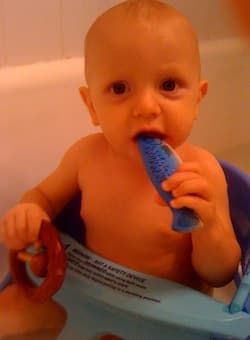 Where Are Phthalates Used?

You’ve probably heard that phthalates are commonly found plastic food and beverage containers, but it turns out their presence extends far beyond that. In fact, about a billion pounds of phthalates are produced every year, and their use is so widespread that they are nearly impossible to avoid entirely. Indeed, ninety-five percent of us have detectable levels of phthalates in our urine.

Phthalates are found in our food and water, too. They are in dairy products, possibly from the plastic tubing used to milk cows. They are in meats (some phthalates are attracted to fat, so meats and cheeses have high levels, although it’s not entirely clear how they are getting in to begin with). You’ll find phthalates in tap water that’s been tainted by industrial waste, and in the pesticides sprayed on conventional fruits and vegetables.

What Are the Effects of Phthalates?

As a result of this ubiquity, we are all ingesting, inhaling, and absorbing through our skin a significant phthalate load—which quickly moves to our bloodstream.

So why is this scary?

Well, if you ask the American Chemistry Council, a lobby group for phthalate manufacturers, phthalates are totally safe and “among the most thoroughly studied family of compounds in the world.” But what do some of these studies show?

The effect of phthalates, especially on male reproductive development, has been observed since the 1940’s, and phthalates are now widely known to be “endocrine disruptors.” So what does that mean? A Frontline special explained that:

“Hormones are chemical messengers that travel throughout the body coordinating complex processes like growth, metabolism, and fertility. They can influence the function of the immune system, and even alter behavior…In response to a signal from the brain, hormones are secreted directly into the blood by the glands that produce and store them. These glands make up what is known as the endocrine system. Chemicals that interfere with the function of hormones are therefore known as endocrine disruptors.”

Phthalates are thought to mimic and displace hormones and interrupt their production. This can have a range of unpleasant effects.

Where Phthalates Are Not Found

Weirdly, not all soft plastic contains phthalates. Most plastic wraps, water bottles, and food containers are phthalate free. But don’t breathe a sigh of relief just yet. Plastic wrap, for instance, typically contains DEHA (di(2-ethylhexyl)adipate), which while not technically a phthalate is chemically very close to DEHP and has been shown to cause liver tumors in rodent studies. My advice is to eschew plastic as much as possible (more on this below).

I don’t know about you, but I’m freaked out. Eliminating all phthalate exposure might be impossible, but we can certainly greatly reduce the burden with the following strategies.

3. Ditch hand-me-down plastic toys. Happily, several types of phthalates are now banned from children’s toys, teething toys, bottles, and feeding products. But these laws only took place in 2009, so anything made of soft plastic that was manufactured before that probably contains phthalates (think rubber duckies, not Legos).

4. Avoid plastic whenever possible, and never heat your food in plastic. Foods that are higher in fat — meats and cheeses, for instance — are particularly prone to chemical leaching. Even BPA or phthalate-free plastic may contain harmful chemicals. Opt for glass food storage containers, and choose bottles and sippy and snack cups that are mostly stainless steel, silicone, or glass.

5. Eat organic produce, meat, and dairy. Phthalates are used in pesticides and are also found in sewage sludge that is used in conventional agriculture. Neither is permitted on certified organic produce, and pesticide-treated animal feeds are not allowed in organic meat and dairy production.

6. Invest in a water filter. Granular activated carbon filters should remove DEHP, which is the type of phthalate used in water pipes. Unfortunately, some sources claim that a percentage of water may pass through the carbon without filtration. A nano-filtration system is more expensive but possibly more reliable way to filter out phthalates.

7. Use your dollars to make sense, not scents. Several manufacturers have sworn off the use of phthalates due to consumer pressure. Others have never used these chemicals. Nothing sold in our online store will ever contain phthalates, obviously!

Here are three places to get more info on phthalates.