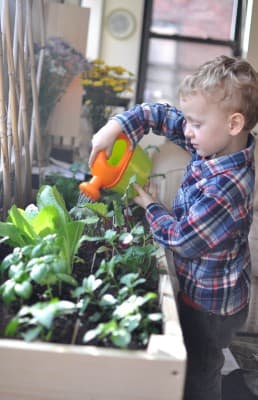 Last weekend, my parents came to visit, and my dad brought an indoor vegetable garden for Felix. It was such an incredible surprise for all of us, and again, I was reminded that my son has the world’s best grandparents. We live in a small New York City apartment, and I have long felt said that Felix, who loves gardening for hours with my mom when we visit my parents, would be denied the chance to have a garden of his own. I am not surprised that my very industrious father found a way to make this possible!

Now, Felix’s preschool teachers want to build a similar garden in his classroom, and I assume I have some city readers who would like to take this on, too. I asked my dad to explain his process of creating this magical little garden, and here is what he said:

I’ve always thought there is something healing about getting your hands in the dirt after a long winter. We have one local grandson, Theo, who loves to garden with my wife and me (he’s only two so we have to make sure he doesn’t step on the young plants!). Felix lives in Manhattan, and after his last visit — when he played in our garden for hours on end — it occurred to me that I could bring a garden to him.

Felix’s apartment has a bank of south facing windows that get a lot of sun. It seems a great place for an indoor garden, so I sat down and drew some plans for constructing a raised garden box.

Making your own garden box is an optional step as most garden centers sell versions of these. In my case, none that I found were the right shape or height for what I wanted, which was a box that would fit into a small apartment without being intrusive. It also needed to be low enough so that a 3-year-old could work in it, but tall enough to catch the sun.

With these criteria in mind, I drew a rough sketch, made a materials list, and paid a visit to my lumberyard. Forty-five minutes and $23 later, I was headed home with everything I needed to build the box. I made a quick stop at the garden center for bags of peastone, topsoil, and organic composted manure, which totaled $12.

I built the box in about two hours. It is certainly not anything fancy, but it is functional, stable, and made of solid wood (Maia can tell you all about how toxic compressed wood is). I had an old bamboo trellis that I figured I could attach to the box to support peas as they grew.

The garden box fit easily in my car, and my wife and I packed up and headed to New York. We made one last stop at the garden center to buy some plants and seeds, plus a child-sized pair of gardening gloves. Luckily, there are varieties of vegetable and fruit plants that do well in small spaces. We opted for cherry tomato, cucumber, lettuce, pepper, basil, mint, and beet plants.

Plants are great, but we also thought it would be fun for Felix to plant some seeds and watch them grow, so we also brought along some peas, nasturtium seeds, spinach seeds and calendula seeds.

Once we had everything up the elevator and into the apartment (the doormen had a good chuckle while they helped me unload all the supplies), it was time to get gardening! I taped a plastic garbage bag into the garden box as a liner, and Felix — grinning ear to ear — donned his new gloves and he helped to spread peastone, then topsoil and manure into the box. Now we had a place to put all the plants. One at a time, Felix and I fit plants into the box, making sure that those that would grow tall were back from the edges, and plants that would droop would live along the edges of the box so they could hang down.

I attached the bamboo trellis to the back of the box and we planted peas along it. Now it was time for watering. Felix has a child-sized watering can, and he watered to entire garden. It will be his job to keep the plants watered as they grow.

All in, we spent about $40 creating Fe’s garden, and it was a fun project for me. Now, whenever I’m in my garden in Pennsylvania, I can think of Felix tending his garden in New York. Maia tells me that he is so excited to see some seeds coming up through the soil, and it will be even better when he gets to eat something he grew himself! Felix says he’s lucky because unlike Mr. McGregor, he won’t have to chase Peter Rabbit out of his garden! 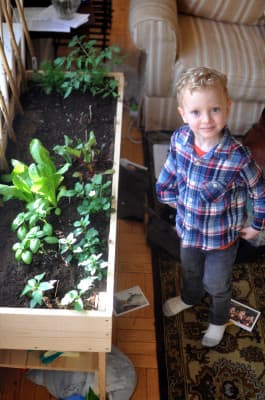 Indeed, Felix has been diligently watering his garden every morning and thrilled to see tiny sprouts poking up through the soil already. While he does bemoan the lack of opportunity for weeding (go figure), he loves donning his special gardening gloves and poking around in the dirt. I am hoping that growing his own spinach and peas will encourage him to eat more of the good stuff!