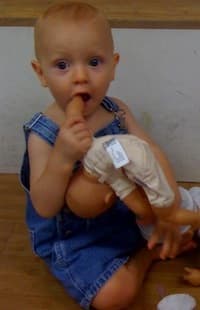 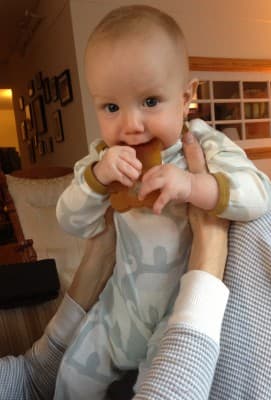 Before I gave birth the first time, I had visions of a nursery filled with toys that were exclusively produced in Europe (preferably by hand) with nary a Fisher-Price label in sight. I pictured blocks made of unfinished hunks of oak, sheepskins for “activity mats,” faceless woolen gnomes, chunky beeswax crayons, and perhaps a wooden rocking horse and a miniature red wagon for when my young Waldorfian reached his toddler years.

And a Playskool Reality…

Fast forward a year or so and our living room was brimming with beeping, flashing, talking plastic, most of which glistened with saliva from frequent visits to Felix’s curious mouth. While the majority of these eyesores were gifts, I’ll admit to buying more than a few battery-operated plastic diversions, generally with high hopes that they would entertain Felix long enough for me to pluck my eyebrows.

At this point, with Felix now 7 years old and Wolfie almost 3.5, I have admitted defeat in this battle–Legos, Transformers, Playmobile–there is more plastic in the boys’ room than there is air.

So while I’ve strayed pretty far from my prenatal principles in some ways, I did remain vigilant about the safety of those toys meant specifically for chewing: namely, teething toys. (I realize that some might call this a silly distinction. Even when he wasn’t cutting any teeth, Felix had a major oral fixation—an unsurprising fact considering I’m one of those people whose desk is littered with masticated pens, some of which may or may not be leaking more saliva than Sophie the Giraffe…but enough about me). 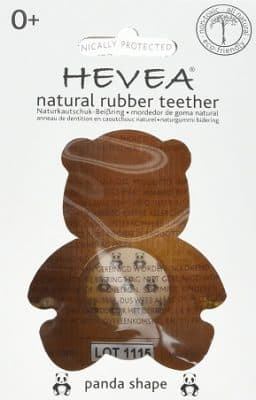 My Top Pick for Best Non-Toxic Teether
The Hevea natural rubber teethers win here, since the panda teether was the only teether Wolfie ever liked!

The Importance of a Non-Toxic Teether

I’ve spent lots of time yanking cell phones, sponges, shoes, and chalk out of both my children’s mouths, so it was nice to have something I could encourage them to chew on when they were teething. While both of my boys’ teeth tended to come in without much drama, some of you probably have kids who experience real teething discomfort, and for you, safe teethers are a must.

Instead of any of these above, you should look for teethers made of unpainted wood, 100% natural rubber, organic cotton, and silicone.

For a really safe, non-toxic teether, get a U.S-made unfinished wooden teether. We like the Camden Rose wooden teether. You’ll pay a reasonable $10-$15, but you’ll probably have to find it online. Waldorf toy stores generally carry Camden Rose products. All rattles and teethers are made in the U.S. of unfinished maple or cherry wood, which can be polished with beeswax (available on the Camden Rose website). One major downside of these teethers: My kids weren’t that into chewing on them! Give them a Made-in-China plastic ducky that smells like baby powder and they would go to town on them, but apparently they didn’t dig maple or beeswax.

My Very Own Rattle

Another wooden teether we love is My Very Own Rattle (yes, it’s also a rattle), which has been made by hand in Vermont since 1979.

Unlike other wooden rattles, this one is made from one solid piece of wood (so does not contain any glue). There is no finish of any kind applied to the wood, just a unique, sanding and polishing process, so there is never a concern about what the baby is getting in his or her mouth beside pure, natural, non-toxic northern hardwood.

If you have a baby, you probably already have Sophie the Giraffe, the ubiquitous and overpriced French squeaky toy that doubles as a non-toxic teether. You can find Sophie almost anywhere, where you’ll shell out almost $25 for her, leaving you surprised and disappointed if your little one doesn’t sit contentedly in the corner for the next week doing nothing but sucking on Sophie’s cute little face. I love that Sophie is old-school (she’s been around almost 50 years), rubber (painted with food-grade paint), and made in Europe instead of China. What I don’t love is that each of my boys had limited interest in her, for chewing or playing. Sophie is available everywhere, including Amazon. Sophie now has a bunch of friends made by the same manufacturer, Vulli. These are safe, too.

And what about the mold? I’m neither surprised nor worried that parents have found mold inside of Sophie. Here’s why.

Under the Nile Non-Toxic Teether 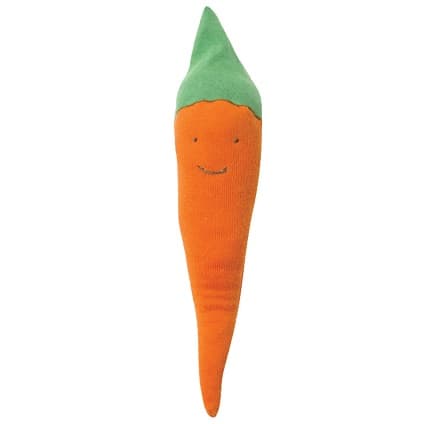 Under the Nile produces beautiful clothing, linens, and toys, all GOTS-certified. Made of and filled with organic Egyptian cotton, their teething carrot is dyed with vegetable or metal-free dyes. (Lots of dyes are loaded with heavy metals–like copper and chrome–which can cause various health problems when they accumulate, especially in tiny, developing bodies). Under the Nile is committed to fair trade, and their teething carrot is reasonably priced. Chewing on cloth doesn’t seem all that appealing to me, but I have seen babies who love these. You can buy this teething carrot in our store and in baby boutiques around the country.

I gave my nephew, Lincoln, this non-toxic teether after the company sent me a sample for review–he loved it! The co-founder of the company, Adam, is clearly committed to the safety of his products, insisting on manufacturing in the United States with only class 6 silicone.  The top part of this teether is medical grade silicone, which is technically implantable in the human body, and the bottom is food grade silicone, which means it’s safe for oral contact. Both varieties are FDA approved as well as CE Mark approved (which is the European, Australian, and Canadian version of the FDA). For every batch of silicone Adam receives, he also gets a Certificate of Analysis confirming that its physical properties meet the standards. The ice cream and cone components of the toy are bonded together during the molding process, so no glues or chemical adhesives are ever used in production.

For now, you’ll need to buy the SweeTooth non-toxic teether on the company’s website, where you’ll pay $15 for one. 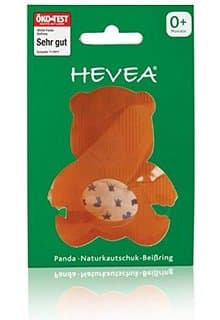 Wolfie loved the Hevea panda teether that my mom got for him on his first Christmas. This 100% natural rubber teether was the only one of all of the above that got a lot of use in our house. Other companies make similar natural rubber teethers–including Calmies and CaaOcho. Natursutten also makes a safe
rubber teether—but avoid their “Chill It” variety, which is made of EVA (see “The Sneaky Stuff” tab).

You’ll pay around $15 for one of these Hevea pandas, and we offer them in our store! 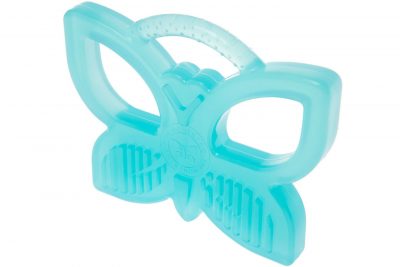 Other companies making safe silicone teethers include Lifefactory and ZoLi. There are also of course the popular silicone teething necklaces.

First Years floating teethers are made of PVC, which contains phthalates, among other issues.

Infantino teethers are made of PVC and contain chlorine and bromine (HealthyStuff.org ranks them as moderately concerning).

If, like mine, your kids aren’t that into gnawing on wood, rubber, or cloth, you might be tempted  by the German-produced Natursutten Chill-it Teethers. These are made of the more appealing plastic-like ethylene vinyl acetate (EVA). I am skeptical of its safety, despite being touted among natural lifestyle experts as being non-toxic (then again, so were Nalgene bottles a decade ago!). Vinyl acetate is a possible carcinogen, and as this is a component of EVA, I am going to say this teether should be avoided.

Another not so great thing about Natursutten teethers? There was a recall on these back in 2009 because some of the liquid inside them was contaminated with a bacteria that could potentially cause illness in children with immune system disorders, although I don’t think any kids actually got sick.

Note that I DO like Natursutten’s RUBBER pacifiers and teethers.

I feel so fortunate that I got to spend Father’s Day with my own dad (whom I’m lucky to call my second best friend, only because my mom is my first best friend...wait am I a loser?) as well as the wonderful brilliant hilarious human I chose as the father of my children. Also there was delicious vegetarian food (mostly prepped by my husband in an amazing kitchen which is a treat for him), lots of cousin time for my kids, and a big family gathering in what felt like a post-covid reality. Happy Father’s Day to all the inspiring dads I am lucky enough to know💜💜. ...