This blog entry is part of our “What’s Wrong With” series, which profiles a eifferent product each week and gives you the bottom line on its safety. Think of these as cheat sheets for our more comprehensive Safe Product Guides. 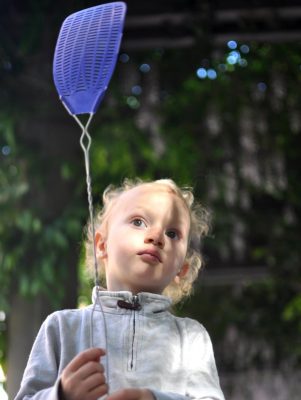 Buggin’ Out About Insect Repellent

Insect bites can be a mere nuisance or a serious health hazard. Gardening during black-fly season in Vermont is a maddening, uncomfortable experience, but it’s nothing compared to the problems associated with tick-borne Lyme disease, which always seems to be on the rise.

It’s no wonder that this time of year we see so many choices of insect repellent in every drug store. So what’s wrong with using Off or another conventional brand?

Insect repellents are designed to confuse, discourage, and even kill bugs so that they don’t find us or bite us. The most commonly found active ingredient in commercial insect repellents is deet (chemical names: N,N-diethyl-m-toluamide or N.N-diethyl-3-methylbenzamide), and by now most of us know that it’s not good stuff. But what exactly is so bad about it?

The Deets on Deet

According to a 2009 study, deet is “not simply a behaviour-modifying chemical but also inhibits the activity of a key central nervous system enzyme, acetylcholinesterase, in both insects and mammals.”

So…I’m a mammal. I’m pretty sure most of the people I know are mammals, too.

The scientists conducting this study found that, in rodents, deet blocked cholinesterase, an enzyme that is responsible for transmitting messages from brain to muscle.

When deet is sprayed on your skin, it is absorbed and eventually enters your bloodstream, where it is pumped through your nervous system, potentially causing neurological damage. Heavy exposure to deet can result in memory loss, headache, pain, and shortness of breath. According to the EPA, At least 14 seizures and four deaths have been attributed to deet toxicity, although considering how many people are exposed to deet each year, the odds of such an event are of course exceedingly low.

In any event, the more you learn about deet, the less terrible the itching of a mosquito bite seems.

Ok, so you want to avoid deet when buying an insect repellent, but beyond that I always prefer plant-based products (conventional brands like Off typically contain fragrance and other chemicals in addition to deet). My favorite natural repellent is Bugs Be Gone by Sierra Sage, which is both effective in keeping insects at bay, and also totally lacks that gross citronella scent (I know some of you probably dig that smell; I don’t!). An added bonus: all ingredients are organic. We now carry Bugs Be Gone in our online store.

Note that the good stuff–be it Bugs be Gone or another natural brand– always requires more frequent applications than products containing deet. But because Bugs Be Gone is so pure, there is no need to rinse it off when not outside with the bugs. The EPA warns us that we should indeed wash deet from our skin after each use, in order to avoid “side effects.” Manufacturers tell us that conventional bug spray should not be used under clothing or on damaged skin, and to always wash it off between applications. This sort of warning doesn’t exactly inspire confidence.

This summer, be smart about biting insects…but be just as smart about the bug spray you choose.