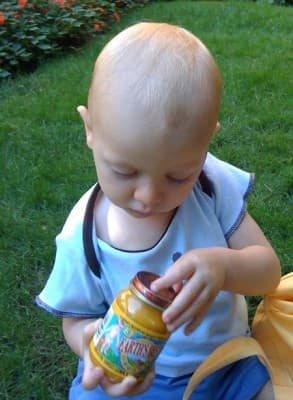 Predictably, I had big plans of feeding Felix only homemade food when it was time to start him on solids. We first tried when he was six months old, but Felix had no real interest in anything besides the ultimate good stuff, AKA breastmilk, until after his first birthday.

I ended up throwing away a ton of homemade fruit and veggie purees that I’d whipped up in the Beaba. Pretty soon, I was buying Earth’s Best jarred baby food for the rare instances when he’d accept a tablespoon at meal time. This experience prompted me to write this guide for other moms looking for the best jarred baby food.

A lot of you have asked about the recent studies on heavy metals in baby foods. Here’s the bottom line, in my opinion: If you avoid rice-based baby food and anything with fruit juice concentrate, you’ll eliminate most of the risk.

–Jarred baby food is cooked at extremely high temperatures so it can sit for years (check the expiration date on a jar for proof!). This processing removes a lot of nutrients, and also affects the flavor of the food.

–Jarred baby food often contains flour or other starches (such as maltodextrin), which serve as thickeners.

–Additives and preservativesmay be included in jarred food–ascorbic or citric acid are commonly found in organic baby foods.

–BPA is often used to coat the lids of jars of baby food, although it may not be present in the food itself.

Bottom line: I think it’s fine to carry a jar of baby food to use in a pinch, but it’s better to make your own (says the girl who totally bailed on making her own). Homemade baby food is cheaper, better for the environment, healthier, and tastier. If you want to find the best jarred baby food, I hope this guide will help.

The Best Homemade Baby Food on the Planet, by Karin Knight and Tina Ruggiero

The Everything Organic Cooking for Baby and Toddler Book, by Kim Lutz and Megan Hart

When it comes to jarred baby food, I found only one decent brand, which of course wasn’t the one I purchased when Felix was eating purees. 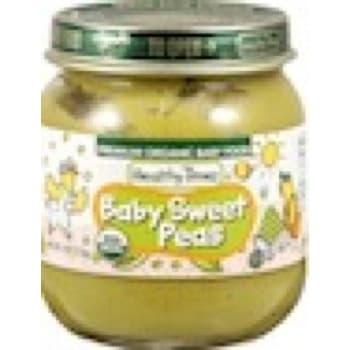 The Good
Healthy Times jarred food contains no starches, is 100% organic, and the founder of the company, Rondi Prescott, says she uses local fruits and vegetables and cooks her food in small batches to preserve flavor.

The Bad
The company has been unresponsive to my messages asking about BPA in the lids of their jars.

How to Get Some
Available in select grocery stores and on Amazon for less than a buck a jar.

Beech Nut jarred baby foods often contain salt, they are not organic, and the jar lids are coated with BPA. Moreover, Beech Nut is rated significantly below average in its impact on society as well as the environment. (Source: GoodGuide’s scientific product rating guide).

AlthoughGerber seems to be a better company than Beech Nut in terms of societal and environmental responsibility, most of their purees are not organic, and there is BPA in their jar lids. Some of the Gerber Graduations Little Meals even contain partially hydrogenated soybean oil (otherwise known as trans fat, which is illegal in several countries as well as in New York City restaurants). Gerber defends its use of BPA on its website, but when I called I was told they do not use BPA in any packaging. Gerber adds substantial amounts of water and thickening agents (flours and chemically-modified starches) to many of their baby foods.

Felix ate lots of Earth’s Best baby food when he started on solids. Earth’s Best jars lids contain BPA (although they claim that independent testing showed no BPA in the food itself). While some flavors are just fruits or veggies, most contain a lot of water, and many contain rice or corn starch as a filler. Earth’s Best Yummy Tummy Instant Oatmeal, Apples & Cinnamon, even contains sugar.

NurtureMe dried baby food packets seem like a great alternative to traditional jarred foods. NurtureMe uses dried fruits and veggies to make powders, to which you add milk or water. Unfortunately, some flavors contain non-organic sunflower lecithin, which may contain trace amounts of hexane, as well as (organic) maltodextrin. 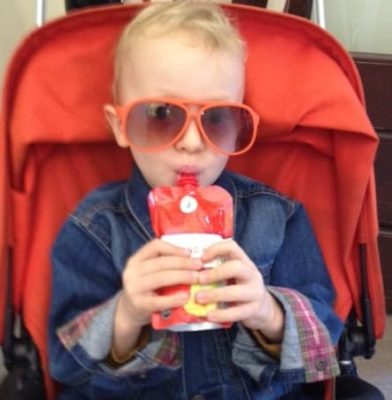 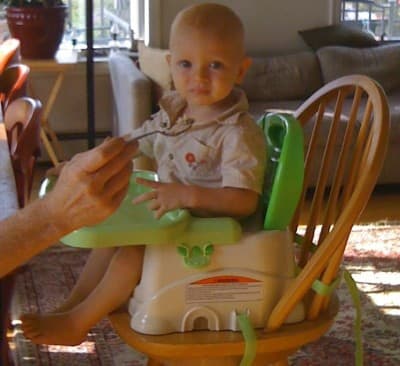