Plant-based milks have become very popular in recent years. They aren’t new, however. When I began to learn about healthy eating back in the 1970’s, soy milk and rice milk were available at health food stores. Now I go to the store and find everything from oat milk to pea milk! The options can be overwhelming.

Many of you have requested that we research plant-based milks. Because this category is now so broad, I quickly figured out that I needed to focus on one type at a time. So I’m starting with the most popular plant-based milk–almond milk. Market research indicates that almond milk has the greatest share of the alternative-milk market.

Spoiler alert: Not all almond milks are created equal, and most of the more popular brands are Sneaky Stuff or Bad Stuff. But don’t worry if I’ve bashed one of your old favorites–there is some amazing Good Stuff out there, and it may be more delicious than anything you’ve tried before. And you can always DIY it. Here is my favorite recipe for homemade almond milk. We’ve also recently become obsessed the Nutr Machine for the easiest possible way to make plant milk.

What are the benefits of plant-based milks like almond milk?

Lighter footprint: Any plant-based milk, be it made from beans, grains, nuts or seeds, has a lighter impact than dairy when it comes to greenhouse gas emissions. A 2018 study estimates dairy to be around three times more greenhouse gas emission-intensive than plant-based milks. However, almond production uses a lot of water. Some estimates suggest that each single almond represents 1.1 gallons of water!

Vegan: Plant-based milks are a dairy alternative for people who choose a vegan diet for health and/or ethical reasons.

Dietary sensitivities: For people who have sensitivities to lactose, casein, or other components of dairy, plant-based milks can be a good choice (barring nut allergies, of course!).

Taste: Some people simply prefer the taste of milk alternatives, and with so many on the market these days, there is something for everyone.

Short answer: Not necessarily! As you’ll see below, there is a lot of Sneaky Stuff and Bad Stuff among almond milk products on the market. In that case, and veganism and dairy sensitivities aside, people may be better off drinking the best dairy milks (local, organic, and from pasture-raised animals) over poor-quality almond milks. But you have some excellent Good Stuff to choose from.

What is almond milk made of? 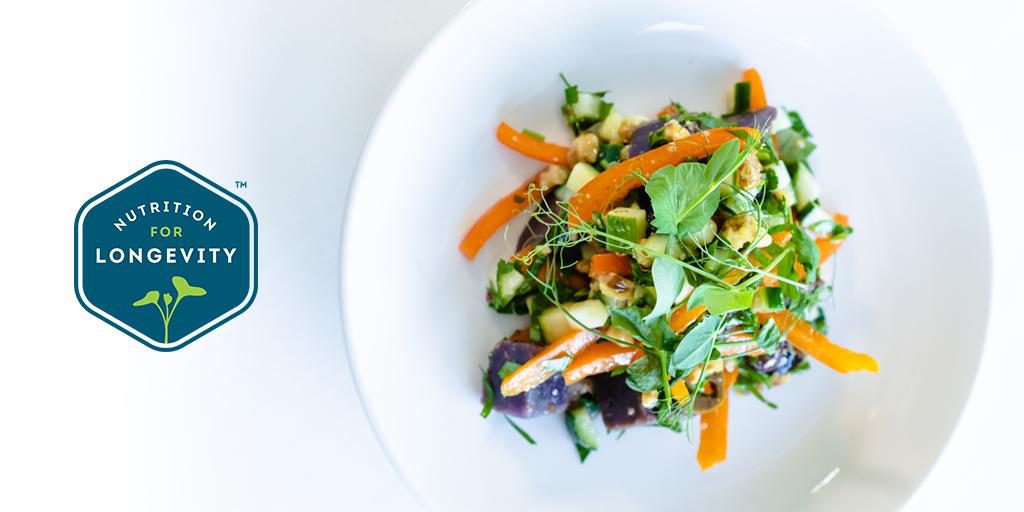 All almond milks include at least almonds and water. Many also have sweeteners, thickening agents, emulsifiers and stabilizers, flavorings, preservatives, added protein, and added vitamins and minerals. Generally, I find that the more ingredients there are in an almond milk, the lower the quality of the product.

Do I need to choose a fortified almond milk?

Some almond milk brands fortify their drinks with calcium and vitamins A, D, and E to better mirror the nutritional profile of commercial dairy milk. Some products even try to outdo cow’s milk by boasting twice the calcium in a cup of the normal stuff!

You may prefer fortified almond milk if you’re seeking a nutritional replacement for dairy. However, this can be a concern if children are consuming fortified almond milk in addition to lots of other fortified foods. It is possible for them to consume too much of nutrients such as vitamin A, zinc, and niacin. This is a complicated issue and will depend on your personal nutritional profile. It’s a good thing to bring up with your health provider.

Personally, I use almond milk in place of cow’s milk, but I am not looking for the nutrition that I would get from cow’s milk. I eat a healthy diet and supplement with a multi-vitamin and vitamin D, so I choose a non-fortified almond milk (see my top pick in Good Stuff).

What about sugar in almond milk?

Thanks to lactose, cow’s milk is naturally sweet, so some almond milks contain added sugars to mimic the taste profile of cow’s milk. Then there are what I call the “dessert milks” that have even more sugar to produce a treat in the form of chocolate almond milk or seasonal “nog.”

What’s the problem with additives in almond milk?

As I mentioned, many commercial almond milks have ingredients that act as thickening agents, emulsifiers and stabilizers, flavorings, and preservatives. These ingredients aren’t all bad; the most problematic ones tend to be some of the stabilizers and emulsifiers. They are usually listed as gums, lecithins, and carrageenan.

Some research (mostly in animals) and anecdotal evidence suggests that these ingredients may cause gastrointestinal inflammation, leading to mild discomfort or gas, or, in the case of carrageenan, potentially even colitis, irritable bowel syndrome (IBS), rheumatoid arthritis, diabetes, and colon cancer. I definitely recommend avoiding carrageenan. If you want to skip all of these questionable ingredients, choose an almond milk from our Good Stuff category.

Most of the popular commercial almond milks contain several ingredients to compensate for a low proportion of actual almonds in the product. In fact, many almond “milks” are really more like thickened almond water. Eww! Some almond milk products have as few as three almonds per cup, while others may contain twenty or more.

How can you tell if you’re choosing actual almond milk, versus glorified almond water? First, check the ingredients list. Look for ingredients such as starches (like tapioca or rice); gums (like guar and gellan); sunflower lecithin; and carrageenan. Generally speaking, almond milk with added thickeners contains the least amount of actual almonds.

Another way to discern how almond-rich your almond milk is: Look at the fat, protein and calorie numbers on the nutrition label. The higher those numbers are, the more almonds are likely to be in the milk.

After a few salmonella outbreaks were traced to California-grown almonds in the early 2000’s, the USDA implemented a rule requiring the pasteurization of California almonds. This rule applies to both conventional almonds and organic almonds, and because almost all almonds grown in in the United States are from California, it applies to almost all domestically produced almonds.

There are a variety of ways to pasteurize almonds, from steaming and dry-roasting to fumigation with propylene oxide. Propylene oxide (PPO) is a toxic chemical used in many non-food applications, and a suspected carcinogen. Fortunately, it is prohibited in organic foods.

But PPO isn’t the only scary thing to watch out for in almonds. Glyphosate, the carcinogenic active ingredient in Monsanto’s RoundUp and other herbicides, is widely used to treat almonds, according to a 2016 EPA document that was released and then retracted.  And unfortunately, thanks to potential cross-contamination, even organic stuff isn’t necessarily glyphosate free. Therefore, organic almond milk is the only Good Stuff, and the very best of the Good Stuff is certified glyphosate-residue free by The Detox Project.

Almond milk is Good Stuff if it’s organic, has no added thickeners or stabilizers, and has only a few necessary, familiar ingredients. 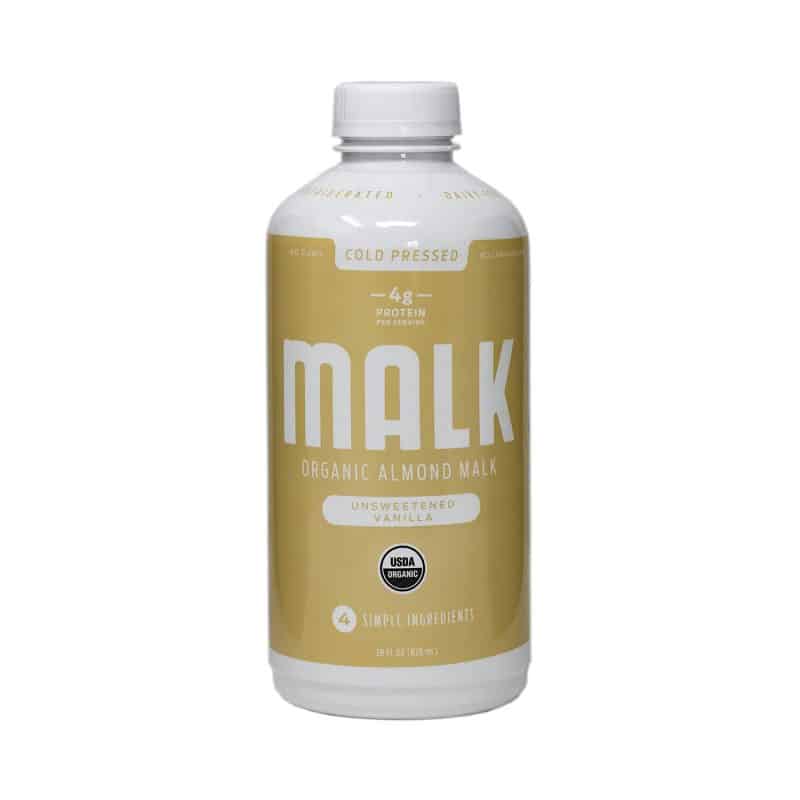 Malk Organic Unsweetened Almond Milk is my personal favorite.. There are only 3 ingredients: filtered water, organic almond butter, and Himalayan sea salt. The Vanilla Malk uses vanilla beans, rather than vague “flavor.” In addition to being organic, Malk is certified glyphosate-residue free by The Detox Project.
A lot of you mentioned that Malk recently changed their ingredients, and this is true (they used to use whole almonds; now they use almond butter).
Malk claims that the reason they stopped using sprouted almonds was because of how wasteful the production process is–this makes sense to me and I still think Malk is the Best Stuff.
Three Trees Original Almondmilk is another favorite of mine. It only has two ingredients: organic almonds and filtered water. They also offer vanilla, pistachio, and black sesame seed versions. All are organic and the only one that is sweetened is the black sesame, which is sweetened with dates, a good alternative to refined sweeteners. 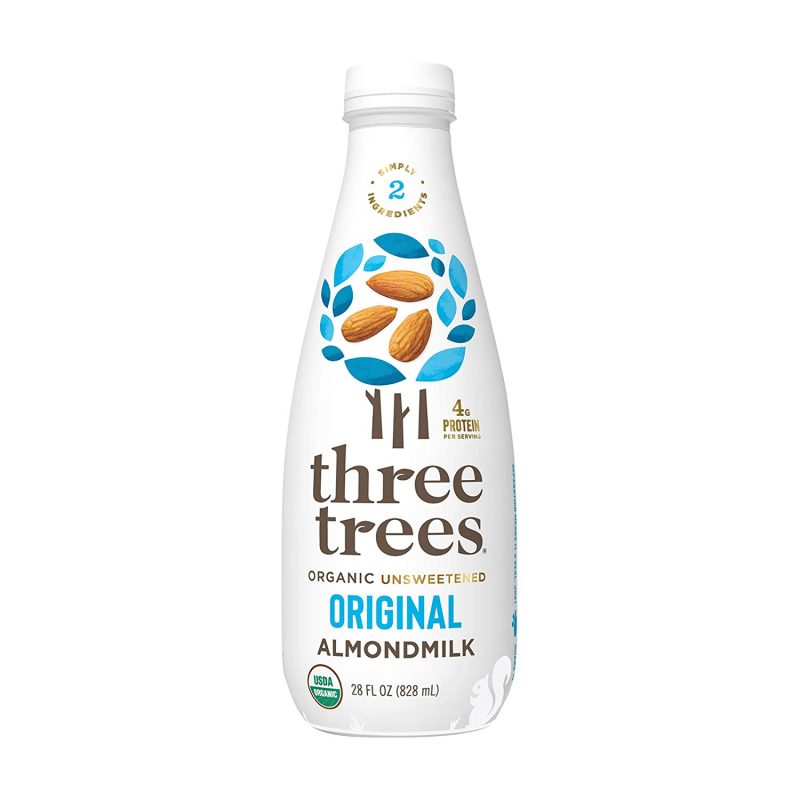 If you’re enjoying this guide, to be alerted when we publish or update our Safe Product Guides.

Elmhurst Unsweetened Milked Almonds contains only almonds and water (good), but the fact that this product is not organic makes it less desirable. I do give them credit for being certified glyphosate-residue free by The Detox Project. Silk Organic Unsweetened Almond Milk and Organic Unsweetened Vanilla Silk are organic and unsweetened, but they may have only a few almonds per cup! Both have an added vitamin and mineral blend, which is a potential problem for children who consume too many fortified foods. The vanilla milk has added “natural” flavor, not real vanilla; “natural flavors” can contain unsavory, undisclosed components and are often anything but natural. Kirkland Organic Unsweetened Almond Milk has added vitamins and other ingredients such as organic locust bean gum and gellan gum; another thickener. These gums are considered safe food additives but some people report problems tolerating them, and I prefer my almond milk to have fewer ingredients. Additionally, this product may have as few as only 5 almonds per cup. Pacific Organic Almond Milk is similar to others in this category. It is certified organic but contains fillers and additives like sunflower lecithin and rice starch. The nutrition label indicates that there are fewer almonds.